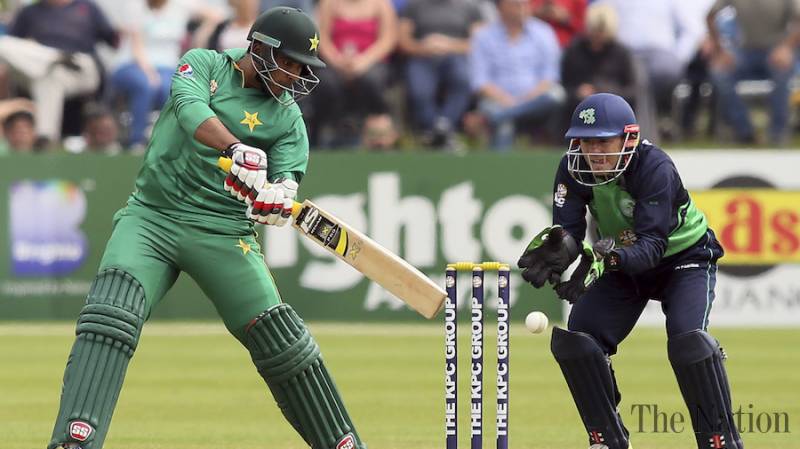 Malahide: Sharjeel Khan said the Pakistan A tour in England had been pivotal to his compiling a stunning maiden one-day international century as the tourists romped to a 255-run victory over Ireland in Malahide.

The 27-year-old opening batsman hit 61 on his ODI debut three years ago but then scored just 123 runs in his next 10 games, losing his place in August 2014.

But on his comeback match on Thursday, he scored the third quickest 150 in an ODI as Pakistan hit 337 for six against a hapless Ireland attack.

Planning and preparation do not fit in with the cliche of mercurial Pakistan cricketers, who can be capable of sublime brilliance one day and abject failure the next.

The Test side, under new coach Mickey Arthur, arrived for a training camp in England before the start of their tour programme and were rewarded with a drawn 2-2 series against their hosts.

Many of the Test side won’t be involved in the five-match ODI series against England starting next week but, having been on the recent A tour, left-hander Sharjeel was equally well prepared for the similar conditions on show in Ireland.

– ‘Natural game’ -“The conditions helped me as I have been with the Pakistan A team in England for the last month. The tour was a good exposure for me,” said Sharjeel.

“I hadn’t been in the UK before and this was my first time in Ireland, but I just played my natural game. It doesn’t matter if it is four-day, one-day, T20, domestic or international I play the same way.

“I am an attacking player, I play hard, watch the ball hard and it’s my natural game to hit sixes. The (Malahide) pitch was not easy but I waited for the full balls and they came nicely onto the bat.”

Sharjeel faced a mere 85 balls to bring up his 150 – only South Africa’s AB de Villiers and Australia’s Shane Watson have reached the landmark quicker in an ODI – and hit 16 fours and nine of his “favourite” sixes, mainly with pull shots over backward square as the Ireland bowlers erred in length.

After his dismissal for 152 in the 32nd over, the experienced Shoaib Malik and debutant Mohammed Nawaz added 105 for the sixth wicket and when the returning Umar Gul then took three wickets in the space of 10 balls to reduce Ireland to 32 for four, the result was never in doubt.

Ireland scrambled past their previous ODI low total of 77 with six wickets down but lost their four for just one run as slow left armer Imad Wasim, familiar with the conditions from his time playing Irish club cricket, finished with five for 14, his best figures for Pakistan.

Nawaz, also promoted from the A tour, took his first wicket to add to his 53 runs from 50 balls and seems certain to get another chance in the second game between the teams on Saturday, although Pakistan one-day captain Azhar Ali was giving nothing away after the match.

“We will sit down tomorrow and think our plans and also how we are going to play against England (in the five-match series immediately afterwards) as we need to keep an eye on that as well,” he said.

Ireland captain William Porterfield accepted his team were outplayed and added he was looking for a much improved performance next time.

“It’s a tough learning curve for young lads coming into the side, against some of the best players in the world,” he said. “We were outskilled today and now it’s about the mental preparation to come back on Saturday.”