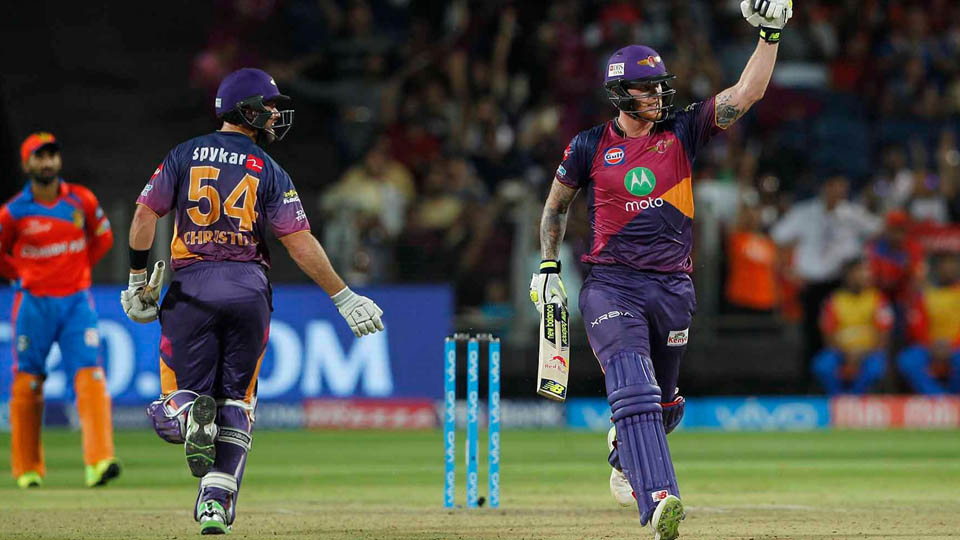 Ben Stokes almost single-handedly helped Rising Pune Supergiant to their sixth win of IPL 2017 on Monday night. Visitors Gujarat Lions scored 161 batting first and had the hosts in all kinds of strife at 10 for 3, before Stokes took control of the chase, scored his maiden T20 century and powered his team past the finish line. Courtesy Stokes’ clean-hitting, RPS chased down the runs with five wickets in hand, getting over the line with one ball to spare.

RPS were rocked early in the run-chase when Pradeep Sangwan and Basil Thampi struck thrice in the first nine deliveries. Stokes, who returned to the RPS XI having recovered from the injury that forced him to miss the last two matches, was slow to begin with; but when he decided to go hard, there was no stopping him.

He began with timing the ball – as against muscling it; his first authoritative stroke was a straight driven boundary off Sangwan in the third over. In the following over, Thampi’s short delivery was swatted away to the midwicket boundary. Sangwan came in for more punishment in the fifth over when Stokes collected a six over fine-leg, and in the following over James Faulkner was cut away to the point boundary.

Though RPS lost the wicket of the consistent Rahul Tripathi in the sixth over – the opener involved in a misunderstanding with Stokes and sacrificing his wicket – the hosts had established some momentum. MS Dhoni, who walked in to bat at number six, began slowly, playing extremely watchfully, particularly against the spinners. He and Stokes got on with the job of setting the innings back on track; they added 76 runs in 10.4 overs in what would be RPS’ highest fifth wicket stand.

There were several periods of quiet in the partnership between Stokes and Dhoni – though both batsmen kept the strike ticking over. But when Stokes decided to go, he gave the ball an absolute hiding, and sent the ball some distance into the stands. Jadeja was hit for successive sixes in the tenth over – the second one a mammoth six over midwicket, while Dwayne Smith conceded a six and a four in the sixteenth.

The fifth wicket partnership was broken in the seventeenth over when Dhoni (26 from 33 balls) threw the kitchen sink at a wide delivery from Thampi, but hit it straight down the throat of Brendon McCullum at long-off. That’s when Stokes turned up the heat; he was particularly harsh on Thampi, who he hit for a four in the seventeenth over and two sixes in the nineteenth over.

RPS needed 8 from the final over. Despite struggling with cramps, Stokes creamed the first ball of the final over through covers to bring up his maiden T20 century. Daniel Christian completed the job in style, hitting the penultimate ball of the innings over square-leg. RPS had won with one ball to spare; Stokes remained unbeaten on 103, made from 63 balls and studded with 7 fours and 6 sixes.

Earlier in the evening, the Gujarat Lions started on overdrive mode before their innings fell apart in the middle overs. Ishan Kishan (31 from 24 balls) and Brendon McCullum (45 from 27 balls) added 55 before their partnership was broken off the last ball of the powerplay. Thereafter, only Dinesh Karthik – batting at number six – made a noteworthy contribution to the innings; the Lions wicket-keeper made 29 before he was ninth batsman out in the final over. The Lions were 94 for 2 after 9.4 overs, but lost their remaining 8 wickets for 67 runs to be dismissed for 161 – with one ball remaining in their allotted quota of 20 overs.

For RPS, their performance on the field was a first – it was the first time that they had dismissed their opponents. Imran Tahir (3-27) applied the skids with three wickets in the middle overs, even picking up wickets of successive deliveries, while Jaydev Unadkat picked up three lower order wickets. Shardul Thakur (1-25) and Daniel Christian (1-27) also chipped in with timely strikes.