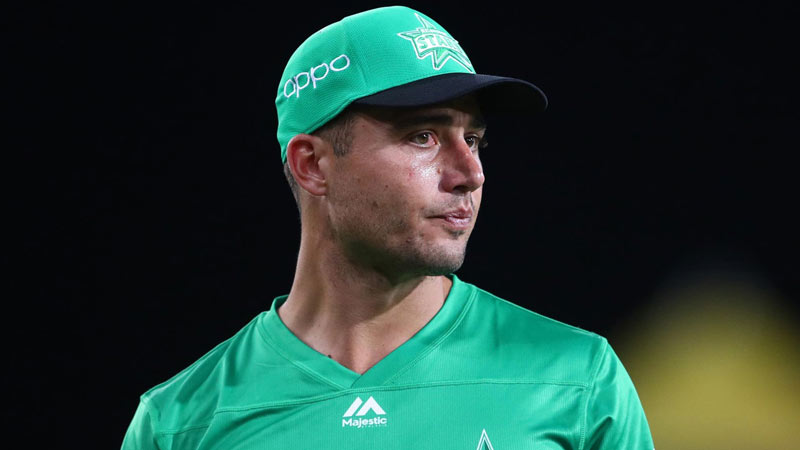 Stoinis has been charged with a level 2 breach of the CA Code of Conduct for personal abuse and hit with a $7500 fine after the Stars’ eight-wicket win over the Renegades in the KFC BBL derby clash.

Stoinis pleaded guilty to the charge and expressed remorse for his behaviour.

“I got caught in the moment and took it too far,” Stoinis said.

“I realised immediately I was in the wrong and I apologise to Kane and to the umpires.

“I did the wrong thing and accept responsibility for my actions. The standards are there for a reason and I accept the penalty.”

The incident comes two months after Victoria quick James Pattinson was suspended for a Test match after using offensive language during a Marsh Sheffield Shield match against Queensland.

Both Pattinson and Stoinis were hit with a level 2 offence, with punishments ranging from a fine up to $10,000 to being hit with two suspension points, which is the equivalent of a Test match.

While Stoinis was fined for his actions, Pattinson was handed two suspension points which ruled him out of the first Test of the summer in Brisbane.

Saturday’s incident occurred during the Stars’ chase of 143 to beat crosstown rivals the Renegades.

It is understood Stoinis, who finished unbeaten with 68 from 55 balls, and Richardson were trash talking at each other before Stoinis crossed the line with a homophobic slur.

The breach was reported by on-field umpires Gerard Abood and Phillip Gillespie, who were seen at the end of play talking to both Richardson and Stoinis along with Renegades captain Aaron Finch.

The Stars’ next game is back at the MCG on January 8 against the Sydney Thunder, the same day the Australia one-day squad – of which Richardson is a member – is set to fly to India for a three-match series.