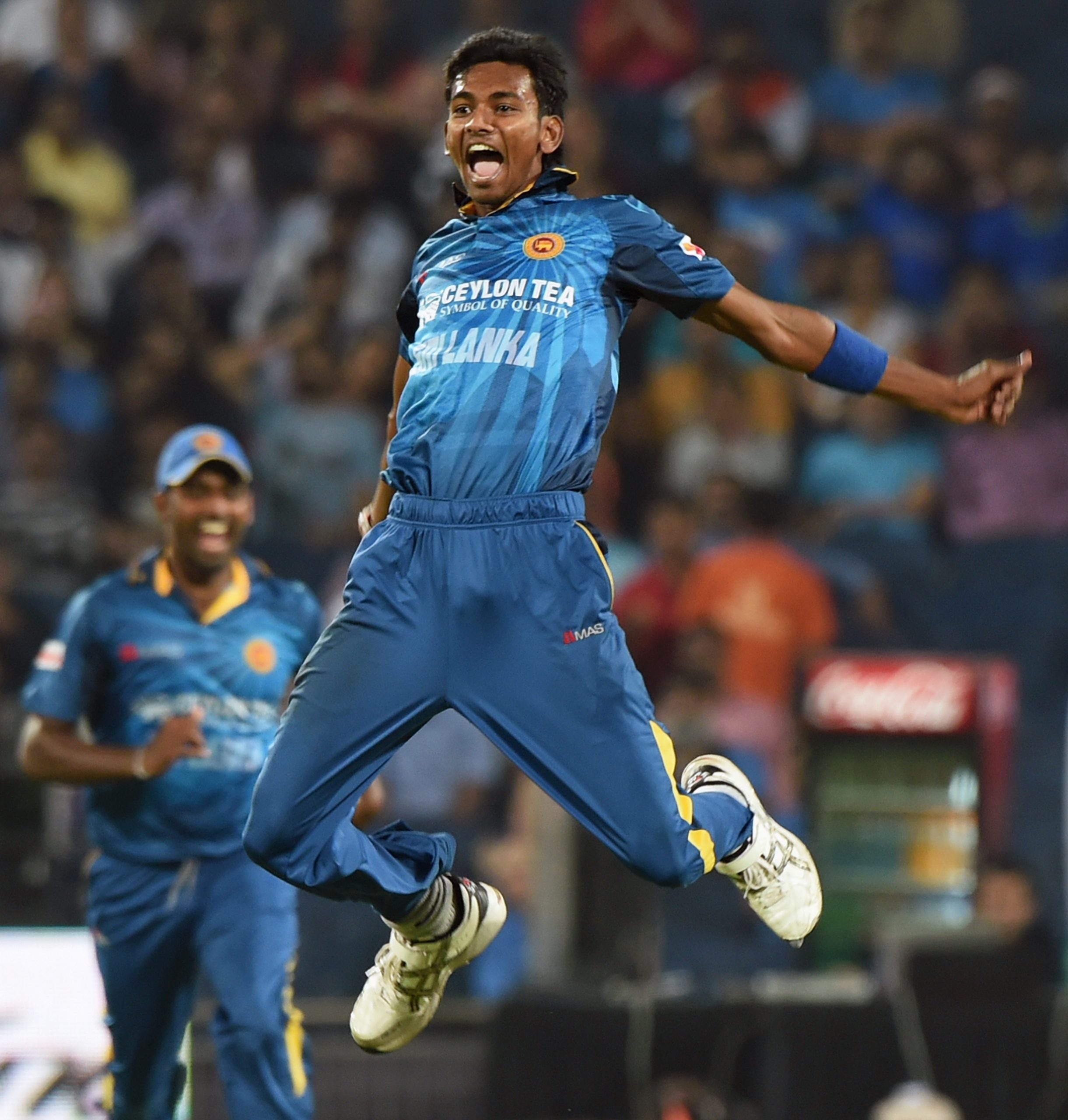 Belying their status as underdogs, the inexperienced Sri Lankan pace attack skittled out their hosts for a paltry 101 in 18.5 overs, India’s third lowest score in T20 cricket.

After Rajitha took the wickets of India’s first three batsman, Dasun Shanaka bagged three other top order scalps on a bouncy wicket in Pune, helped by some poor selection by the hosts.

Sri Lanka made hard work at times of meeting their target, losing five wickets during the chase, but the Dinesh Chandimal-led side eventually eased home with two overs to spare.

Regular T20 skipper Lasith Malinga, Test captain Angelo Mathews and premier spinner Rangana Herath have all stayed at home as they try to shake off niggles before Sri Lanka begin their defence of the Asia Cup later this month and then return to India for the World T20.

But their stand-ins soon showed they would not be overwhelmed by a capacity crowd at the Maharashtra Cricket Association Stadium after winning the toss and electing to bowl.

The 22-year-old Rajitha made his presence felt right away with a double strike in his first over in international cricket. In-form Rohit Sharma was the first to go, caught by Dushmantha Chameera off only the second delivery and Ajinkya Rahane (4) followed soon after.

Rajitha nearly got his third wicket in his next over, only to see Danushka Gunathilaka spill a sitter at third man to give Suresh Raina a life. His disappointment was short-lived as Shikhar Dhawan was caught by Gunathilaka for just nine.

Raina made little use of his reprieve and he was cleaned up by Shanaka in the ninth over for 20 as the wickets tumbled with alarming regularity.

“They (Rajitha and Shanaka) were exceptional. They hit the right length from the start,” said batsman Chamara Kapugedra, one of the Sri Lanka side’s few old hands.

“We always knew we were the underdogs but knew if we played to our full potential we had a chance,” he told the Star Sports television network.

India should have been full of confidence after their recent 3-0 T20 away series win over Australia, which secured their place at the top of the rankings but none of their batsmen showed any kind of form.

– Poor shot selection -Skipper Mahendra Singh Dhoni, who made just two before being caught behind off Shanaka, admitted that the team had failed to adapt to the conditions and some of their shots had been rash.

“It was a lot different to what we faced in Australia. After the game, we will talk about the shot selection,” said Dhoni.

After Dhoni’s dismissal, the big-hitting left-hander Yuvraj Singh (10) was the next to go when Chameera had him caught and bowled in the tenth over.

A cameo of 31 by spinner Ravichandran Ashwin enabled India to edge past the three-figure mark but it was never likely to be enough.

Indian pace spearhead Ashish Nehra gave the fans something to cheer about with the early wickets of openers Gunathilaka and Niroshan Dickwella.

But, showing much more application than their hosts, Chandimal and Chamara Kapugedera then compiled a 39-run third wicket stand that effectively put the outcome beyond doubt.

After their partnership was broken, Milinda Siriwardana also weighed in with an unbeaten 21 to give the visitors a dream start to the series. AFP

How Tendulkar put Kohli on path to glory