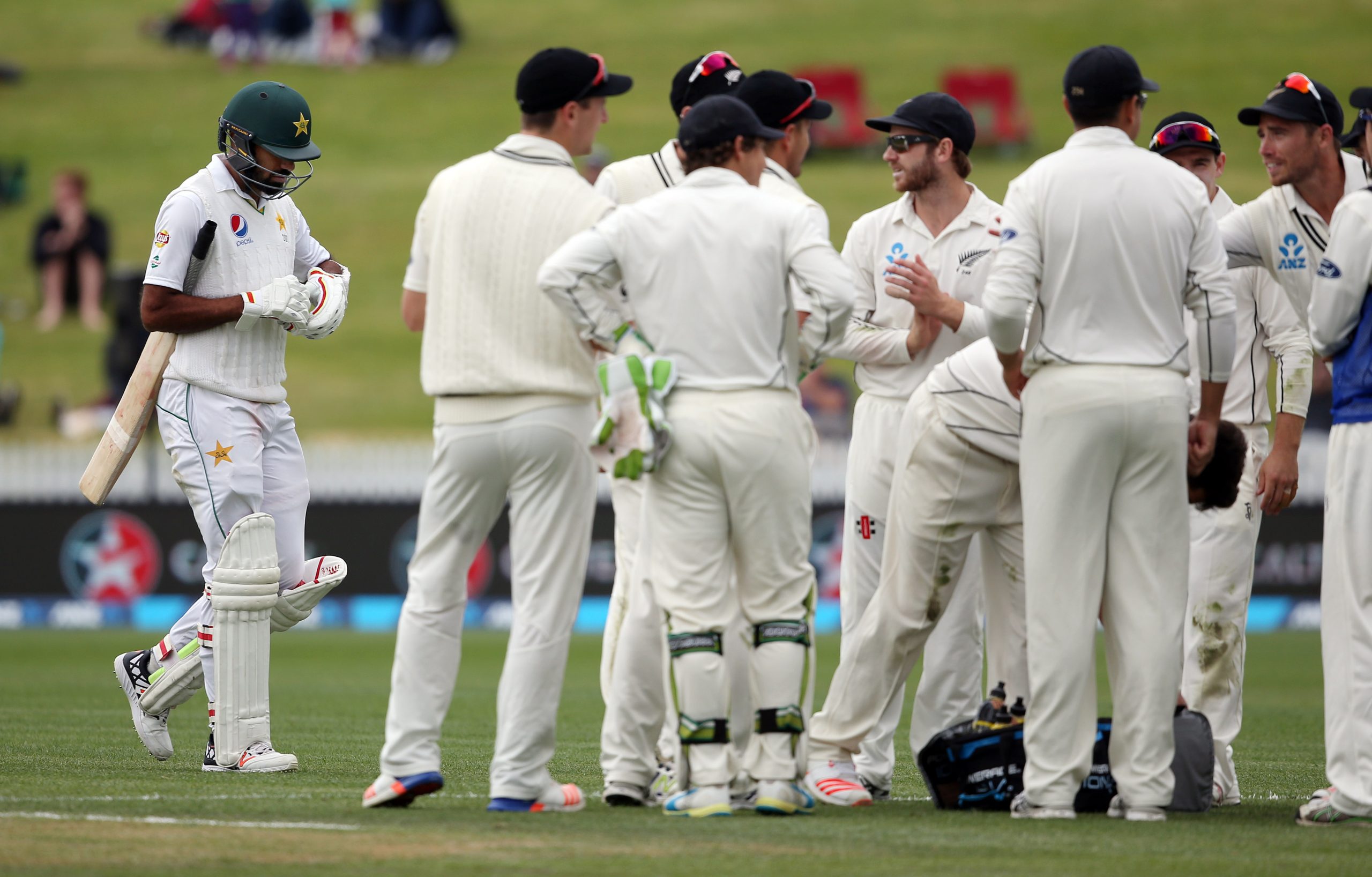 Hamilton: Tim Southee bagged six wickets as New Zealand took a 55-run lead over Pakistan on a rain-shortened third day of the second Test in Hamilton on Sunday.

Only rookie batsman Babar Azam was able to cope with New Zealand’s chief strike bowler and he was left stranded on 90 after running out of partners as Pakistan fought their way back into the match.

Pakistan, after resuming the day on the ropes at 76-5, clawed their way to 216 in reply to New Zealand’s first innings 271.

New Zealand only faced one dot ball in their second innings before rain sent the players from the field for the third and final time in a day when only 38 overs were possible.

Southee was given a pounding in his first three overs of the morning and was removed from the attack after yielding 32 runs.

But he came back to wrap up the tail and finish with figures of 6-80, his third-best bowling performance.

“There was still a bit of swing at that stage and I went back to what we’ve done well for a number of years,” Southee said of his successful second spell.

“You’ve got plans you put in place for certain batsmen and it’s nice when they do come off.

While the 54-Test veteran headlined the New Zealand bowling performance, it was Azam in only his third Test who brought Pakistan back into the game.

The 22-year-old was considered a special talent at age-group level and announced himself on the international stage last month with three consecutive centuries in Pakistan’s one-day series against the West Indies.

He followed with a 69 in his Test debut against the West Indies and looked set for his maiden Test hundred when the Pakistan innings ended in Hamilton.

“I’m thankful the lower order gave some resistance but it was unfortunate I could not complete my 100,” he said.

Azam also drew praise from Southee who said the way he handled the seaming conditions was promising for Pakistan.

“For a guy to come here in his first Test tour of New Zealand and play the way he’s played is a good sign he can play in conditions that are foreign to them,” Southee said.

Pakistan put on 124 for the loss of three wickets to be 200-8 before the day’s first rain stoppage just before lunch, with Azam patiently collecting runs while Sarfraz Ahmed (41) and then Sohail Kahn (37) attacked the bowling.

Unlike the rest of the Pakistan top order who were caught behind trying to slash outside the off stump, Azam waited for loose balls in an innings which lasted 277 minutes and he faced 196 deliveries.

Ahmed survived two chances in his 74-run stand with Azam. He was dropped on 19 by Henry Nicholls at midwicket, and Tom Latham missed a direct shy at the stumps when Ahmed was trapped in the middle of the pitch.

The arrival of Neil Wagner to the attack accounted for Ahmed when he was caught by Jeet Raval at second slip.

Sohail had no trouble with Wagner’s stock short-pitched delivery, repeatedly pulling him to the boundary in a 67-run partnership with Azam.

However, when Southee returned to find a better line in his second spell he found the edge of Sohail’s bat and wicketkeeper BJ Watling completed the dismissal.

Wahab Riaz faced only five balls before he was lbw to Colin de Grandhomme leaving Southee to remove Mohammad Amir for five and Imran Khan for six.

Despite Azam’s bold innings to keep Pakistan in the game, the outcome may ultimately be decided by the weather with more rain forecast over the next two days and New Zealand only needing a draw to take the series after winning the first Test.