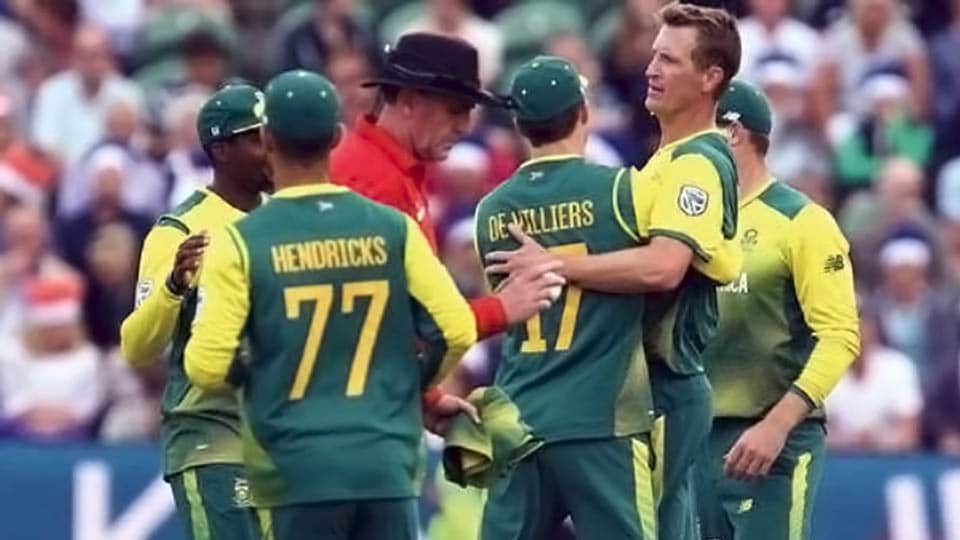 Taunton: Chris Morris said South Africa were prepared to “take it and run” after the extraordinary dismissal of England’s Jason Roy helped set up a morale-boosting win in the second Twenty20 international at Taunton.

A tour that had already seen the Proteas lose a one-day international series to England 2-1, and cement their reputation as serial under-achievers at major events with a first-round exit at the Champions Trophy ODI tournament before Wednesday’s nine-wicket thrashing in the first Twenty20, was heading for yet another defeat while Surrey opener Roy was making a stylish 67 at Taunton on Friday.

But the match swung South Africa’s way when Durban-born Roy became the first player in a Twenty20 international to be given out obstructing the field.

The incident happened when Roy veered off a straight course and was hit by a throw from Andile Phehlukwayo when short of his ground.

South Africa appealed and, after the decision was referred to third umpire Tim Robinson, the former England opening batsman decided, as required under cricket’s Law 37, that the obstruction had been “wilful” and Roy, to his visible dismay, was given out.

The Proteas still had work to do, with England now 133 for three in the 16th over chasing a victory target of 175.

But with seam-bowling all-rounder Morris taking two for 18 — a haul that gave the 30-year-old the man-of-the-match award — South Africa held England to 171 for six for a three-run win that saw them level the three-match series ahead of Sunday’s finale in Cardiff.

An unapologetic Morris said of Roy’s exit: “It’s part of the rules.

“It looks a lot worse than it actually is with us appealing like that, but you’ve got to appeal to get a decision from the umpires.

“We’ll take it and run, but the on-field umpire told me at the time that the right decision was made.”

South Africa’s victory was achieved despite the absence of coach Russell Domingo, who made an emergency return home after his mother was involved in a car crash.

“It’s been a tough tour, admitted Pretoria-born Morris in answer to a question from AFP at a press conference.

“I still maintain in the Champions Trophy we lost the game at the wrong time,” added Morris, with top-ranked South Africa suffering a pool defeat by bottom-ranked Pakistan, the eventual winners, before another group loss to beaten finalists India sealed their fate.

“We’ve been so good over the last 18 months and we just lost the game at the wrong time.

“It’s been blown up in our faces that we never perform well in those tournaments.

“Southampton wasn’t good for us obviously. England outplayed us there (in the first Twenty20).

“We weren’t good enough on the day, they absolutely destroyed us,” Morris added.

“We knew we needed to put up a good fight. It’s one hell of a honour to play for South Africa and I think the boys showed it. We proved out there we’ll scrap to win a game of cricket.”

Meanwhile England captain Eoin Morgan was confident there would be no lingering bitterness between the teams at Cardiff as a result of Roy’s unusual dismissal.

“Absolutely not, not at all,” Morgan told reporters. “We’ll take it for what it is.

“Everyone in the changing room thought it could go either way so it’s not massively controversial.”

England’s cause was not helped by new batsmen walking out in real gloom on a ground with no floodlights.

“It wasn’t easy in that light,” said Morgan, who added he would have changed his decision to field first had he known how bad it would get.

Asked by AFP if those were the darkest conditions he had played in, Morgan replied: “By a country mile.”

But Morgan insisted England had only themselves to blame, saying: “We didn’t deserve to win because we didn’t capitalise on the start we had.”