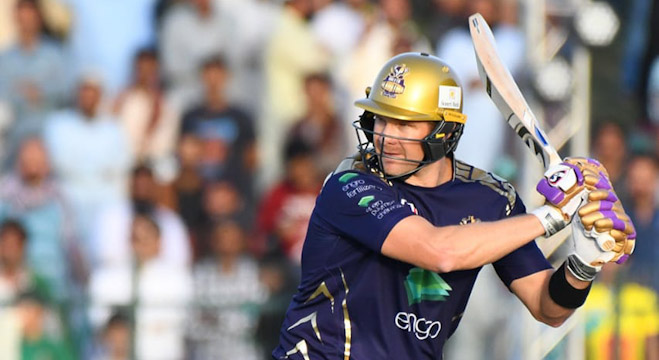 March 6, 2019 | By ScoreLine Desk
Karachi:The HBL Pakistan Super League 2019 received a welcome news on Wednesday when World Cup winner Shane Watson of Quetta Gladiators confirmed he will travel to Karachi to feature in his side’s upcoming matches in the HBL Pakistan Super League 2019.
Watson had initially agreed to play matches in the United Arab Emirates, but changed his plans following discussions with his family and after being convinced by his franchise team-mates and owner.

Watson won the ICC Champions Trophy 2006 and 2009, and the ICC Cricket World Cup 2007 and 2015 with Australia before retiring in 2016. One of the most sought after players in T20 leagues, Watson is presently the leading HBL Pakistan Super League 2019 run-scorer with 332 runs at an average of just under 47.5 with a strike-rate of over 141.

Shane Watson: “I am very excited as it has been 14 years since I was in Pakistan last.

“It was always going to be difficult to leave before the final. I am very excited, we have got a great squad, a great team this year and I would love to be involved with Quetta Gladiators taking that final step. So, I can’t wait to get over to Karachi.

“I am sure that everyone will turn out in their droves to support, not just the Quetta Gladiators but also the PSL. It’s a great tournament and I can’t wait to get there.

“While Quetta Gladiators will benefit from his rich experience and excellent form, Shane’s appearance in Karachi sends out a clear message that above all else, players are united in supporting Pakistan in restoring cricket back to where it belongs, in Pakistan.

“The game is all about engaging with the passionate Pakistan fans and making it an incredible experience. I am confident that with all the sides featuring full strength sides, the crowds will turn up in strong numbers and play their part in making this a success both for the country and the players.”

Quetta Gladiators have already qualified for the play-offs, but will take on Karachi Kings in their final league match on 10 March.