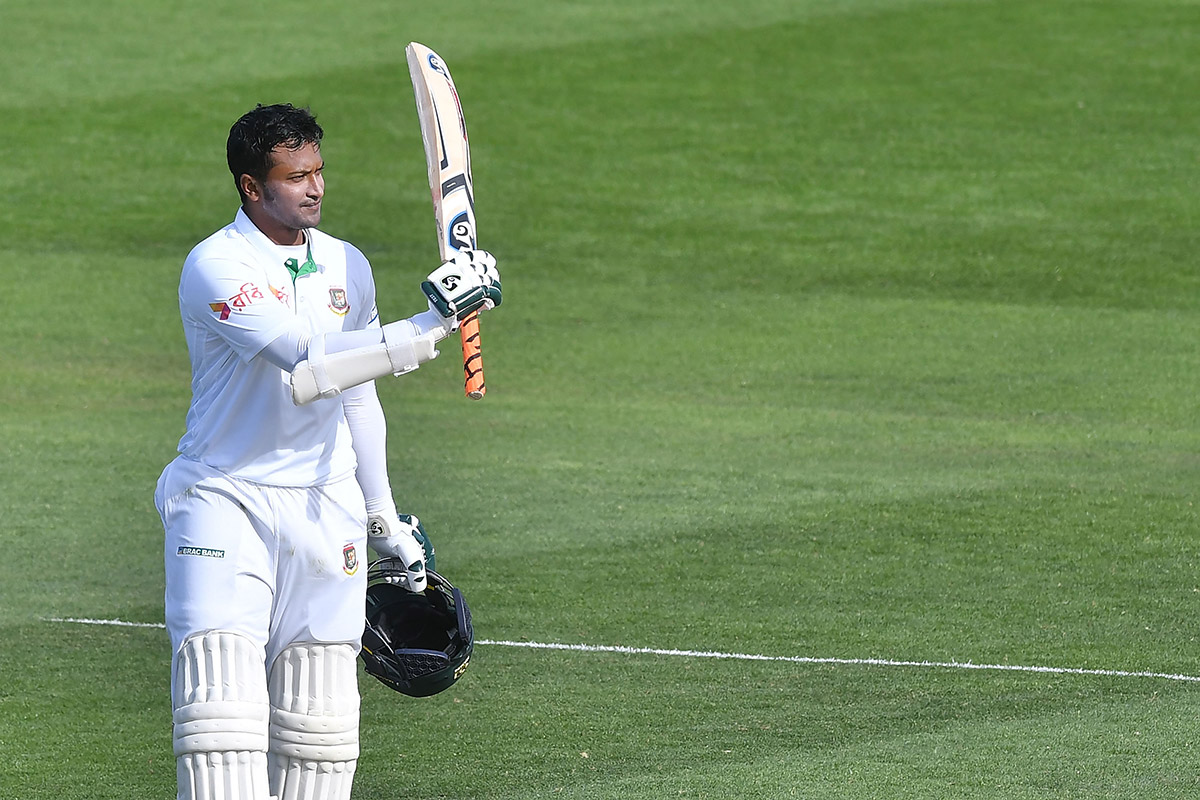 Wellington: A double century from Shakib Al Hasan and a ton from Mushfiqur Rahim hammered New Zealand as records tumbled and Bangladesh took control of the first Test on Friday.

They closed day two at Wellington’s Basin Reserve on 542-7, subjecting New Zealand to a harsh day on the field.

Shakib fell 15 minutes before stumps for 217, the highest score ever by a Bangladesh player.

Mushfiqur went a short time earlier for 159 after the pair had put together a record all-time partnership for Bangladesh of 359, eclipsing the 312 by Tamim Iqbal and Imrul Kayes against Pakistan two years ago.

It is also the highest fifth-wicket stand by any team against New Zealand.

The 542 total is the third-highest first innings at the traditional bowl-first ground in its 59-Test history.

As the track flattened out, Shakib cruised past the milestone 3,000 runs and at the end of his innings he was on 3,146 to become Bangladesh’s second-most prolific batsman behind Tamim who moved to 3,405 with his 56 on the first day.

With the wind and rain that disrupted day one out of the picture, New Zealand had early success in the fourth over when Mominul Haque fell for 64 and honours were even with Bangladesh at 160-4.

But for the next 82 overs Shakib and Mushfiqur were in command as they piled on 359 runs at nearly 4.4 an over and with an element of luck.

Shakib was dropped on four by Mitchell Santner late on the first day and dropped by Ross Taylor on 189.

He survived a tight appeal on 137 when wicketkeeper BJ Watling took what appeared to be a sensational diving catch down the leg side only for replays to show he briefly grounded the ball on hitting the turf.

It was Wagner who eventually claimed the wicket when a tired Shakib chopped an attempted cut onto his stumps and it was Wagner who also led the applause for Shakib as the New Zealand team acknowledged his masterful innings.

Mushfiqur had a heart-stopping moment on 78 when an inside edge off Boult brushed the stumps but the bails stayed on and the ball went through to the boundary.

Boult eventually claimed the Bangladesh captain with a wide delivery that Mushfiqur attempted to drive but succeeded only in edging to Watling.

He faced 260 deliveries in his innings and cracked 23 fours and a six while Shakib batted for nearly seven hours, faced 276 deliveries and hit 31 fours.

Wagner was the most successful New Zealand bowler with three for 124 while Boult had two for 121 and Southee two for 144.

Curran steps up as England beat Australia in final ODI