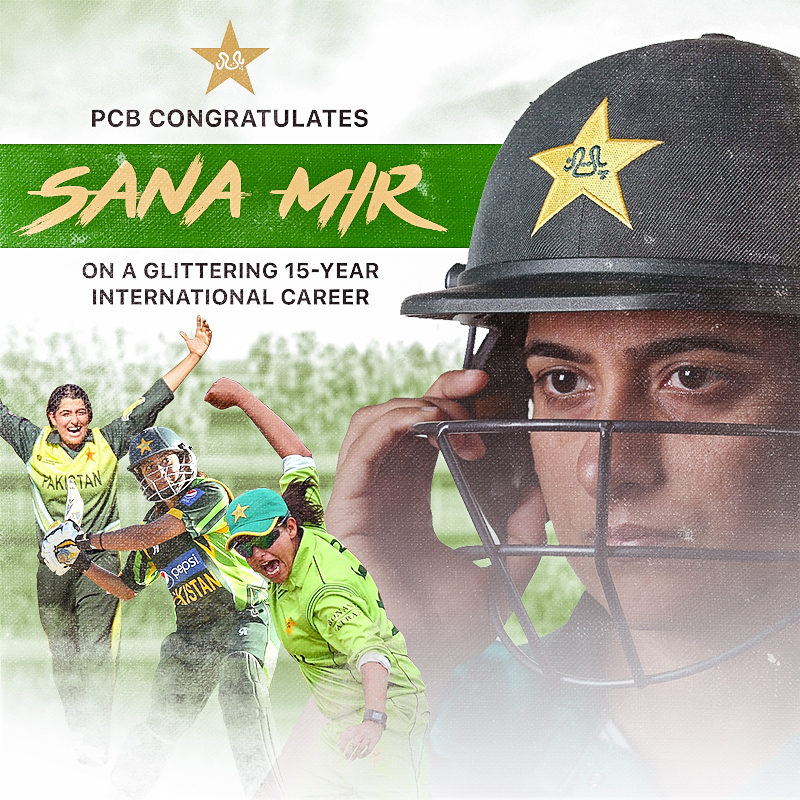 In a statement, Sana Mir said: “I want to extend my gratitude to the PCB for giving me an opportunity to serve my country for 15 years. It has been an absolute honour and privilege. I extend my gratitude to all the support staff, players, ground staff and everyone behind the scenes for their contribution in my career and development of women’s cricket.

“I also want to thank my family and mentors who provided unconditional support that allowed me to fulfill my dreams of representing Pakistan at a global stage and would also like to thank my departmental team ZTBL for their support throughout my career. I look forward to continue serving them if department cricket continues.

“Last few months have provided me with an opportunity to contemplate. I feel it is the right time for me to move on. I believe I have contributed to the best of my ability for my country and the sport.

“During my cricket journey, I have met and built strong friendships and bonding with some amazing cricketers in women’s cricket. Listening about their stories and philosophies have not only made me a tougher and stronger athlete but have also taught me great things about life, which are beyond yourself or the sport or winning and losing.

“When I reflect on my debut, it gives me great satisfaction that I have been part of the process that has eventually resulted in a packed-to-capacity Lord’s for the ICC Women’s World Cup 2017 final, something that was further boosted by a record 87,000 spectators for the ICC Women’s T20 World Cup 2020 final at the Melbourne Cricket Ground. These are great success stories for women’s cricket.

“I would like to extend my gratitude to ICC for its continuous support to women’s cricket. Tournaments like ICC Women’s Championship have been a real game changer, especially for teams like Pakistan, South Africa and Sri Lanka as they proved vital in helping us express our talent at the international level.

“Last but not the least, all the cricket fans and supporters around the world. Words fall short when I want to thank all of you for your love, support and encouragement you extended in the past 15 years. It has been an honour to serve Pakistan in cricket and to wear the green jersey with absolute pride. It is time for me to move on. InshaAllah the service will continue in essence and in a different form. Pakistan Zindabad.”

PCB Chief Executive Wasim Khan paid tribute to Sana Mir: “On behalf of Pakistan cricket, I congratulate Sana Mir on a highly successful career. She has been the face of Pakistan women’s cricket for many years and the real source of inspiration for the young generation of women cricketers.

“Through her determination and passion, Sana broke the glass ceiling for women cricketers in the country. Through her performances, she not only improved the profile of women’s cricket in Pakistan, but also enhanced the image of Pakistan globally.

“Sana is a true legend of women’s cricket who attracted, inspired and motivated young women athletes. Moving forward, I am sure she will continue to contribute positively to women’s cricket.”

Sana Mir’s career at a glance:

Chris Gayle says he is among West Indies greats

West Indies’ Pollard out of T20s for ‘personal reasons’