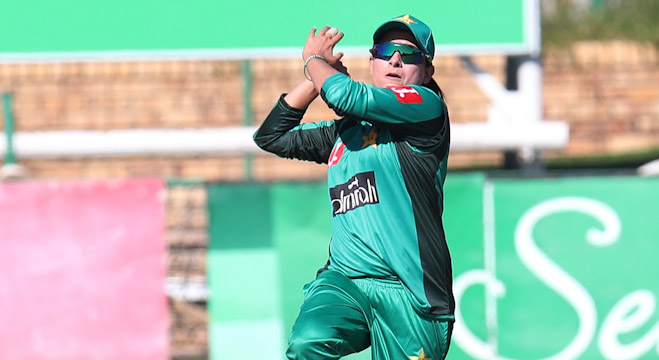 Lahore: Sana Mir will aim to become the most successful ODI spinner in the world, while Pakistan will attempt to win their maiden series against South Africa on Thursday when Potchefstroom will host the second One-Day International of the ICC Women’s Championship between the two sides.

Sana returned figures of 6-1-11-4 in the opening match on Monday to send South Africa spinning out for 63 in 22.5 overs. Pakistan raced to victory with 212 balls – their biggest in terms of balls remaining – and eight wickets to spare.

Sana, Pakistan’s most celebrated and gifted women cricketer, is presently sitting on 145 wickets and needs two wickets to move ahead of Anisa Mohammed of the Windies and Lisa Sthalekar of Australia. In doing so, she will also jump from fifth to third in the list of most successful bowlers, which is headed by fast bowlers Jhulan Goswami of India (218) and Australia’s Cathryn Fitzpatrick (180).

“I have been blessed by the Almighty to be able to represent my country for so long. I have never aimed for a personal milestone like this until now. As now I am two wickets away so I would definitely want the Pakistan flag in the list to jump up few places but our first aim for next match is to seal the series, representing Pakistan and cricket has been an absolute honour.”

“If we can win it, then the result will mean more to everyone, including millions of fans following us back home,” Sana Mir said, adding: “The culture of this team is to look at the larger picture and always put the team before yourself.

“The new culture has changed the outlook and performance of the side and today we stand on the verge of winning our first-ever ODI series against South Africa and that too in South Africa. But we cannot afford to be complacent, we know South Africa will come back hard at us and we will have to be at our brilliant best to prevent them from getting back in the series.”

Pakistan women’s cricket team had also defeated the West Indies earlier this year in Sharjah in the ICC Women’s Championship. It was their maiden series win over their more experienced, fancied and formidable opponents, who had also won the ICC T20 World Cup 2016 in Kolkata, India.

Sana said she will be more delighted if her record inspired the next generation of women cricketers.

Sana is presently ranked third in the ICC rankings, but is expected to make an upward movement when the rankings are updated and released on Monday, 13 May.

Pakistan have previously defeated South Africa in four ODIs, but never won a series. They first won in November 2011 by three wickets in Dhaka, then in January 2014 by four wickets in Doha, then in March 2015 by 57 runs in Sharjah and finally by eight wickets on Monday in Potchefstroom.

With the top four sides from the ICC Women’s Championship to qualify directly for the ICC Women’s World Cup 2021, Pakistan have a chance to rise as high as second in the points table.

However, to make it happen, Pakistan will have to win both the remaining matches that will lift them from fifth to join England on 18 points. The net run-rate will then decide which side will be placed second and third.

Squads (to be selected from):

Morgan urges Stokes to ‘be himself’ as Samuels clash looms

Secret approval of PCB constitution is identical of revocation of Article-370 by Modi!