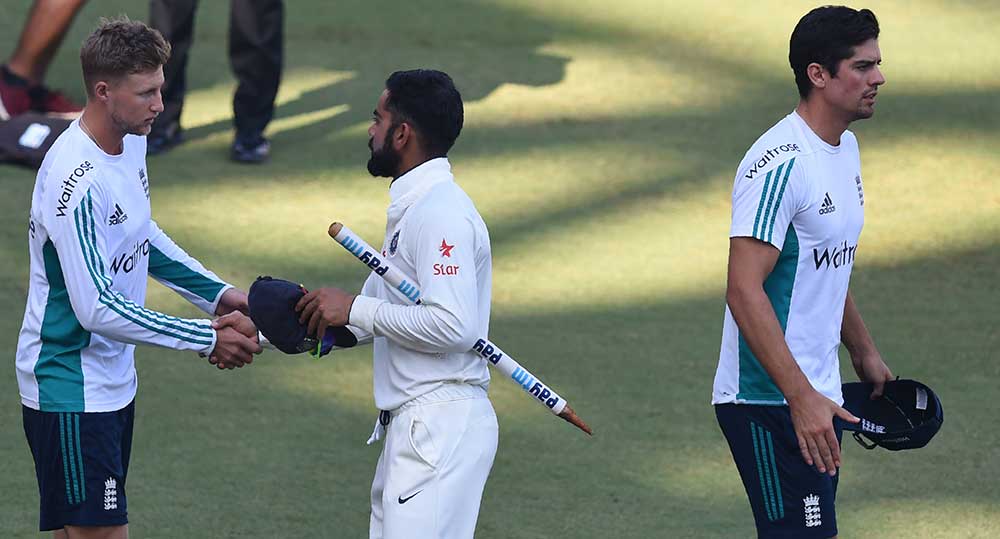 Mumbai: England captain Alastair Cook said Monday Joe Root was ready to take over as skipper but that no decision on his own future would be taken until the new year.

India humiliated England in the fourth Test in Mumbai to clinch the series 3-0 with a match to spare, raising questions about how long Cook can remain in the job.

His future was called into question just before the tour started when he admitted he could quit at the end of the series and he was finding it difficult to be apart from his family for long periods.

“It sticks true to the end of this series. Then I’ll sit down with Straussy (England’s Director of Cricket Andrew Strauss) in the new year, like we made that pact to always talk openly and honestly about stuff.”

Indian spinner Ravichandran Ashwin claimed four wickets in just half-an-hour on Monday morning to send England crashing to 195 all out, meaning the hosts won without having to bat a second innings.

It was the tourists’ third heavy defeat in a row in the series after the drawn first Test in Rajkot.

“My position hasn’t changed whether we won this game or lost,” said Cook, 31, who admitted though that the nature of the defeat could influence his thinking.

“You start having questions, of course you do. Naturally you look at stuff. Clearly it’s a hard place to come on tour with the balance of our squad,” he added, referring to England’s lack of world-class spinners.

Root has been widely tipped to succeed Cook and the veteran left-hander said the 25-year-old was the ideal candidate to step into his shoes.

“I think Joe Root is ready to captain England. He’s ready because he’s a clued on guy, he’s got the respect of everyone in the changing room.

“He hasn’t got much captaincy experience but that doesn’t mean he can’t be a very good captain,” Cook added, saying the magnitude of the task should not be underestimated.

“You’re thrown in at the deep end and you kind of sink or swim. Nothing can really prepare you for it.

“You are the forefront of the team and it comes onto your shoulders when you win or lose.

“In the heat of the battle you make those decisions. You either make good ones or bad ones and you have to live with that,” said Cook.

Cook, who recently overtook Michael Atherton’s record of 54 Tests as England captain, said a lack of world class spin bowlers had hurt his side in India.

“This is no disrespect to Mo (Moeen Ali) and Rash (Adil Rashid) but Graeme Swann and Monty Panesar were world class bowlers in 2012,” when England won a series in India, said Cook.

“I think Mo and Rash have bowled well but they’re not yet in that league.”

Fakhar Zaman breaks into the top-20 for the first time

Kohli keen on county stint ahead of England tour