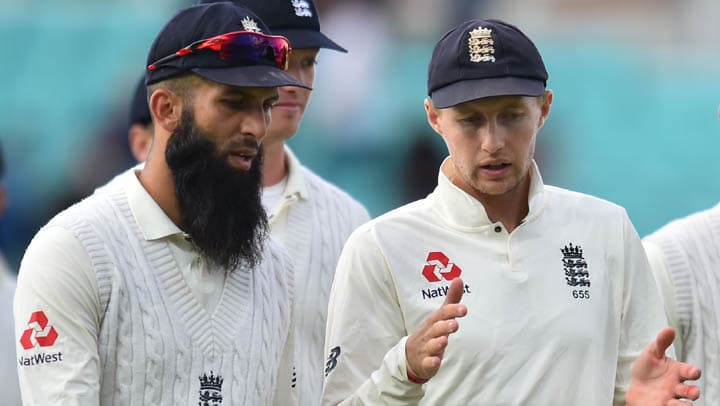 London: Joe Root was delighted with England’s all-round effort as they bounced back to hammer South Africa by 239 runs in the third Test at The Oval on Monday.

England’s Moeen Ali finished things off in style by becoming the first bowler in 100 Test at The Oval to take a hat-trick.

“What a way to celebrate the 100th Test at this ground,” Root told Sky Sports of off-spinner Ali’s hat-trick.

Man-of-the-match Ben Stokes, who caught two of Ali’s hat-trick victims, had a good view when Morne Morkel fell lbw to complete the Worcestershire all-rounder’s treble — although England had to first review an original not out decision.

“I can’t believe it didn’t get given out,” said Stokes, who helped Ali start his hat-trick by catching Dean Elgar to end the opener’s gritty 136.

“Credit to Dean Elgar with the innings he played,” added Stokes,

“It was a really gutsy hundred, we were glad to see the back of him.”

Meanwhile an elated Ali said of his hat-trick ball: “I was very confident it was out.

“As soon as the ball left my hand I thought it was straight, and then when it hit the pad I was surprised the umpire (West Indies’ Joel Wilson) initially didn’t give it.

“It was a great feeling. The match ball went straight into the pocket.”

But much of the hard work that helped put England 2-1 up in this four-Test series had been done before the Ali’s landmark feat after lunch on Monday’s fifth day.

England came into this match on the back of a colossal 340-run defeat in the second Test at Trent Bridge.

But Ben Stokes, angered at suggestions that the team’s desire was being called into question, made a well-constructed 112 in seam-bowler friendly conditions during a first innings total of 353 at The Oval that also saw ex-captain Alastair Cook weigh in with a valuable 88.

“We got stuck in and posted a very good score on a challenging wicket,” said Root.

As for his century Stokes, often troubled by accurate seamer Vernon Philander, admitted: “I had to work pretty hard, especially early on.

“There were some difficult periods, with the wicket offering a bit, particularly for Vernon Philander — I lost count of how many times he beat the bat.

“It’s pleasing to get through those hard times.”

Philander, however, spent much of this match off the field with a viral complaint, having tormented England at Trent Bridge.

“It’s obvious to say that Vernon Philander missing out for us in that first innings was a huge moment in the game,” said South Africa captain Faf du Plessis.

“The conditions at that time needed someone like him, an expert in challenging the batsmen.

“To allow England 350 in that first innings was probably about 100 too many, but you have to also give credit to the way England played.”

England responded to their Trent Bridge trouncing by selecting three debutants in their XI at The Oval, the south London headquarters of county side Surrey.

One of those new caps was Toby Roland-Jones, a stalwart seamer on the other side of London’s River Thames with Lord’s-based Middlesex, the reigning English county champions.

The 29-year-old had an England debut to remember, returning match figures of eight for 129 and scoring 45 valuable late-order runs.

“It has been draining at times, but to be a part of these last five days and to come out on top is obviously very rewarding,” said Roland-Jones.

“I couldn’t be happier.”