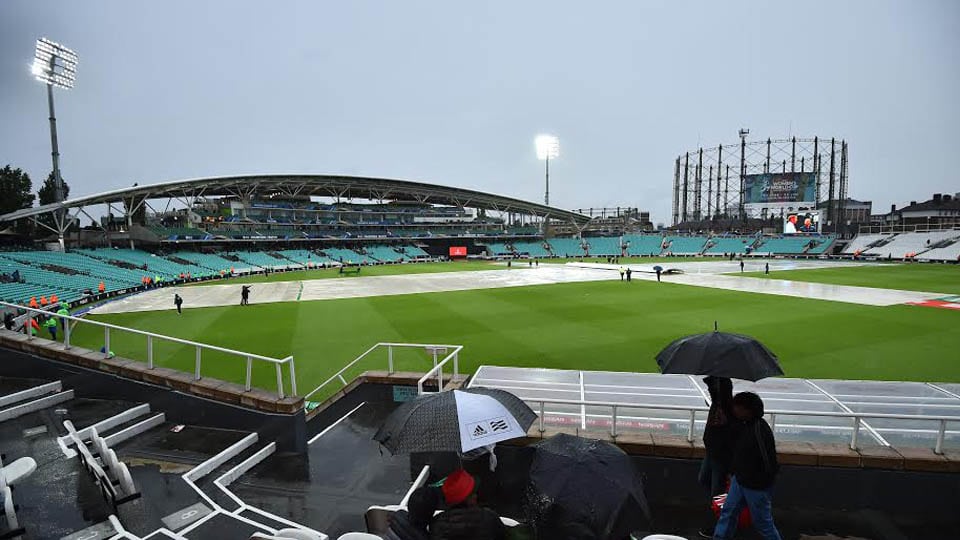 London: Australia face a make or break Champions Trophy showdown with England after their Group A clash against Bangladesh was abandoned due to rain on Monday.

Steve Smith’s side were chasing 183 to beat Bangladesh at The Oval when persistent drizzle forced the players from the field.

Having scored 83-1 from 16 overs, Australia only needed to play for four more overs to be eligible to win via the Duckworth-Lewis rule for rain-affected games.

Instead, Smith and his team-mates were reduced to anxiously looking at weather updates and peering upwards for any sign of a break in the slate grey sky.

Unfortunately for Australia, who bowled out Bangladesh for 182, the rain became heavier and the match was called off at 2019 GMT.

Australia will be cursing their luck as they were also frustrated by bad weather when their opening group fixture against New Zealand was abandoned, although on that occasion they were in a less commanding position.

With England, who won their opener against Bangladesh, due to play New Zealand in the next Group A fixture, two-time champions Australia will have to beat the hosts in Birmingham on June 10 to qualify for the semi-finals.

“It’s a little bit frustrating not to get a result in,” Smith said.

“Of course I didn’t want to go off. I was happy to keep batting through the rain.

“The umpires are there to make a decision. To be fair it was raining reasonably hard when we did come off.

“The groundsmen, they perhaps could have shown a bit more urgency being a big tournament. But they did the best job they could.”

Tamim Iqbal’s 95 was the highlight for Bangladesh, who are winless and face New Zealand in their final group tie.

Despite Iqbal’s best efforts, Mitchell Starc’s spell of four wickets in nine balls ensured Australia had the upper hand before the rain arrived.

Aware that ominous clouds were gusting in, Australia needed to get off to a fast start to have a chance of winning on the D/L rule if the required 20 overs were bowled.

Aaron Finch and David Warner both crushed a pair of fours as Australia raced to 37-0 in six overs.

Warner was especially aggressive, pulling one tame delivery from Mashrafe Mortaza off his hip and away to the fence in a flash.

Rubel Hossain briefly stemmed the tide when the Bangladesh seamer dismissed Finch lbw with an inswinger the opener couldn’t handle as he played across his pads.

When Warner’s total reached 37 he had passed 4,000 runs in one-day internationals.

After the rain began to pour, Australia briefly had hope when the covers were taken off and the umpires announced play would start at 1930 GMT.

But instead the rain returned before the game could restart and Australia’s hopes of victory were washed away.