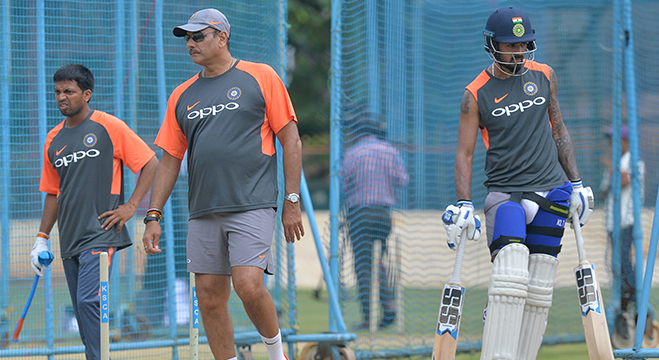 Bangalore: Top-ranked India will be “ruthless” and not take Afghanistan lightly when they make their Test debut in Bangalore, skipper Ajinkya Rahane said Wednesday.

It will be a historic moment for Asghar Stanikzai’s team when they step out on Thursday for their maiden five-day outing against the world’s number one Test side.

But Rahane, who is standing in as captain for Virat Kohli, said there was no room for complacency in cricket.

“We are not ging to take Afghanistan lightly. They have a decent team… bowlers (are good),” he told reporters on the eve of the one-off Test.

“As a Test team we cannot take anyone for granted because cricket is a funny game. We want to go out there and be ruthless.

“We are going to focus on our strengths, our positives. We are not thinking about Afghanistan as well: yes, we respect them as our opponent but it’s important for us to go out there and give more than our 100 per cent,” said the top-order batsman.

The strife-torn nation secured Test status last year along with Ireland, who lost their debut match to Pakistan in Dublin last month.

Since gaining ODI status in 2009 the Afghans have made giant strides and qualified for their second 50-over World Cup in England and Wales next year. They have also been part of four Twenty20 World Cups.

Rahane said it would be an “honour” for every Indian player to be part of the match and acknowledged Afghanistan’s big moment on the cricket field.

Stanikzai has insisted that his team’s spin department led by teen sensation Rashid Khan is better than India’s.

Khan, the top T20 bowler in ICC rankings, took the Indian Premier League by storm with his 21 wickets for runners-up Sunrisers Hyderabad, and mystery spinner Mujeeb Ur Rahman also impressed in the cash-rich tournament.

Rahane refused to draw comparisons between the spin attacks of the two teams, but praised the experience of India’s Ravichandran Ashwin and Ravindra Jadeja as well as the talent of Kuldeep Yadav.

“Every member of their team believes that their side is good, that their bowling attack or their batting unit is much better,” Rahane said.

“We all know the stats but we don’t focus on them. Our spinners, Ashwin, Jadeja and Kuldeep are experienced and quality spinners.”

Rahane, who captained Rajasthan Royals in the IPL, said it was important now for his team’s players to switch mentally from T20 mode to playing in the longest format.

“A couple of practice session were fantastic after coming back from the IPL,” he said.

“It’s important we play our minds rather than skills, because getting back to Test from T20 cricket is all about tuning your mind rather than focusing on your skills.”

Renshaw not first player to get runs in India

Fell rises to the occasion on county comeback