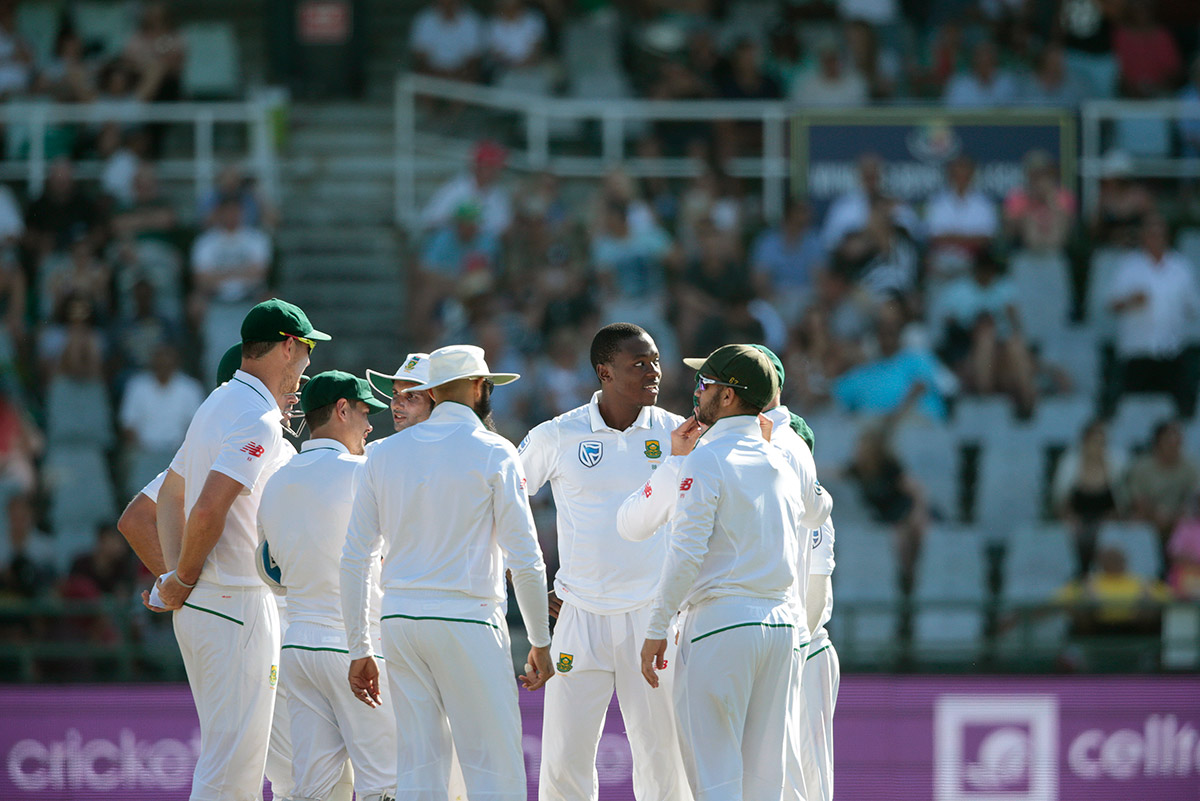 Cape Town: Fast bowler Kagiso Rabada said South Africa would rely on the pace and bounce of the Newlands pitch when they press for a series-clinching win in the second Test against Sri Lanka at Newlands.

Rabada took two wickets in successive overs to send the tourists plunging towards defeat. Set a massive 507 to win, Sri Lanka were 130 for four at the end of the third day on Wednesday.

As in the first innings, the 21-year-old Rabada made a crucial breakthrough to end some stubborn Sri Lankan resistance.

Kaushal Silva and Dhananjaya de Silva defied the South African bowlers for more than an hour in a third wicket partnership of 41 before Rabada dismissed both batsmen in the space of seven balls.

Silva was caught off his glove at short leg for 29. He followed up with a fast full toss which struck De Silva (22) low on his front pad.

Umpire Rod Tucker immediately gave De Silva out leg before wicket and neither De Silva nor his batting partner, captain Angelo Mathews, thought it worth calling for a review.

De Silva was almost back in the pavilion when replays showed the ball would have missed his leg stump.

“I bowled it straight,” said Rabada. “We thought it was close and it went our way. Apparently it was missing. He could have reviewed it so easily but he didn’t. It looked very close and it struck him on the full, so it was unlucky for the batsman.”

Although Rabada picked up three wickets in the second innings in South Africa’s 206-run win in the first Test in Port Elizabeth, he admitted: “I didn’t feel good rhythm.”

Newlands, though, was going better.

“I just bowled more and got better through bowling.”

With the ball 40 overs old, Rabada said the pitch was not giving undue assistance to the bowlers.

“The ball’s a bit old now and getting a bit softer but there’s a bit of pace and bounce and the odd ball has the potential to misbehave. So we’ll plan our tactics now. We’re in a good position.”

Mathews and Dinesh Chandimal batted well during the last hour, putting on an unbeaten 61 for the fifth wicket.

But South Africa will expect to wrap up the game — and the three-match series — reasonably early on Thursday with Sri Lanka having only one recognised batsman to come, followed by a lengthy tail.

Rabada finished the day with two for 22, while Vernon Philander had two for 34.

Silva, who faced 70 balls for his 29, gave credit to the South African bowlers.

“They’re not giving many loose balls and with their height they get the bounce. They also bowl accurately on a good length. You have to be very patient.”

South Africa declared their second innings on 224 for seven in mid-afternoon.

Opening batsman Dean Elgar hit a half-century to add to his first innings hundred, while fast bowler Suranga Lakmal restored some pride for the tourists, taking four for 69 and ensuring that South Africa did not bat with complete freedom as they sought to set up the declaration.

Elgar, who made 129 in the first innings, scored 55 before he was caught at slip off left-arm spinner Rangana Herath.

Faced with an almost impossible task, Sri Lanka got off to a poor start when Philander bowled Dimuth Karunaratne for six in the sixth over with a ball which swung back between bat and pad as the left-hander attempted to drive.

Kusal Mendis made four before he was out to a poor shot for the second time in the match, driving at a ball from Philander, which was well outside his off stump, to be caught at third slip.

Silva said he expected the team’s young batsmen, some of whom have been dismissed with loose strokes, to gain from their experience in South Africa.

“They are still young. They’ve got a lot of time and hopefully they will learn from their mistakes.”