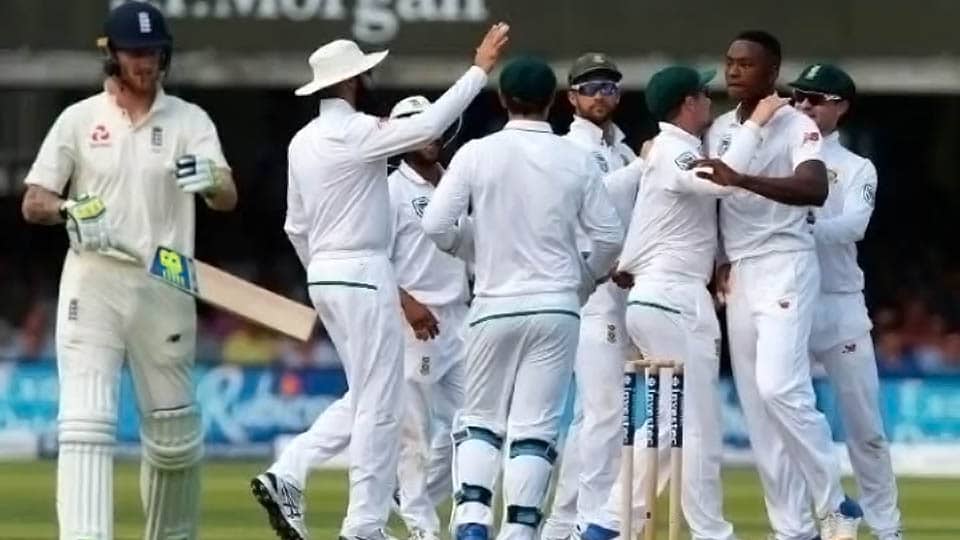 London: Kagiso Rabada is “heartbroken” at being banned from next week’s second Test against England at Trent Bridge, according to South Africa team-mate Temba Bavuma.

Rabada was suspended after picking up a fourth demerit point for swearing at England’s Ben Stokes after he dismissed the all-rounder on the first day of this four-match series at Lord’s on Thursday.

The fast bowler, one of world cricket’s rising stars, was previously given three demerit points for a shove on Sri Lanka’s Niroshan Dickwella in a one-day international in Cape Town in February.

“KG (Kagiso) is an emotional character — he didn’t purposely act like that, but he was fully aware of the consequences,” Bavuma told reporters after stumps on Saturday.

“He is quite heartbroken, because he feels he has let down the team. But we fully understand it happened in the heat of the moment,” added Bavuma.

England ended the third day of the first Test well-placed at 119 for one in their second innings — a lead of 216 runs.

The diminutive Bavuma, one of several Proteas batsmen to make fifty without going in a first innings total of 361, said he had been ‘sledged’ (subjected to verbal abuse) on the cricket field since he was a schoolboy.

“You don’t want it to be completely taken away but you still want the respect of the game to be there,” he added.

“A balance needs to be achieved.”

Meanwhile there was a measure of sympathy for Rabada from England paceman James Anderson.

No stranger to verbal dust-ups with the likes of Australia’s Mitchell Johnson and Michael Clarke, as well as a spat with India’s Ravindra Jadeja at Trent Bridge three years ago, Anderson had mixed feelings regarding Rabada’s ban.

“Obviously, it’s good for us – because he’s an outstanding bowler,” Anderson said.

“It’s a tough one, because for me I like to see bowlers playing with aggression —  which he obviously does.

“But the scrutiny we’re under now, with stump mics, ‘spidercam’ out there, you can’t really get away with anything.

“As much as we like to see players with passion, there’s obviously a line that the ICC have drawn – and you’ve got to stay the right side of it.”

And the 34-year-old Anderson, England’s all-time leading Test wicket-taker, said the current environment had led to a change in his behaviour.

“It is something that’s helped me in the past, being quite aggressive with the opposition, trying to get in people’s faces sometimes, trying to unsettle them.

“But now it’s something that is difficult to do, with the amount of scrutiny we’re under.”

Turning to the match situation, Anderson said: “It’s a very strong position, and we’re very happy with it.”

Former captain Alastair Cook ended the day 59 not out in just his second Test innings since handing over the reins to Joe Root.

“You wouldn’t want any else for that position when you need to graft through an evening session,” said Anderson of Cook.

Meanwhile South Africa seamer Vernon Philander, who didn’t bowl on Saturday after being hit on the hand while batting against Anderson, is expected to return to the Proteas’ attack on Sunday after scans showed severe bruising but no break.