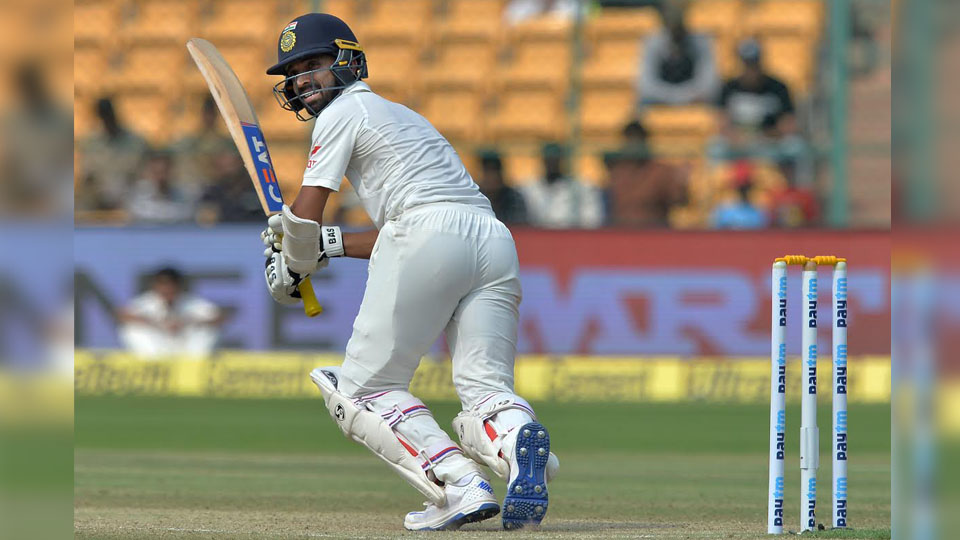 Bangalore: Batsman Cheteshwar Pujara hit an unbeaten half-century to lead India’s spirited fightback against Australia on the third day of a gripping second Test in Bangalore on Monday.

The hosts were 213 for four at stumps, leading Australia by 126 runs in their second innings after the tourists’ hopes of building a big lead were undermined by an oustanding bowling performance by Ravindra Jadeja.

Pujara on 79 and Ajinkya Rahane on 40 were batting at close of play.

The duo put together a stubborn 93-run partnership for the fifth wicket to lift India from a wobbly 120-4 at Bangalore’s M Chinnaswamy Stadium.

Pujara led the way with his controlled knock as he kept a persistent Australian attack at bay, prompting skipper Steve Smith to rotate his bowling options.

Rahane was equally persistent in his resolve to give the visitors a daunting fourth innings chase as he hardly played a loose shot during his 105-ball stay.

The 29-year-old Pujara, who recorded his 14th Test fifty in his 46th Test, capitalised on a dropped chance by Smith at first slip off Nathan Lyon when he was on four.

Off-spinner Lyon, who had grabbed a career-best Test haul of 8-50 in the first innings, went wicketless on a day when Indian spinner Jadeja claimed six wickets.

It was Australian seamer Josh Hazlewood who rattled the Indian top-order with his three wickets, including the prized scalp of skipper Virat Kohli in the afternoon session.

Hazlewood trapped Kohli lbw for 15 on a shooting inswinger and a review did not help the star batsman as he walked back to a stunned silence at Bangalore’s M Chinnaswamy Stadium.

India’s move to promote all-rounder Jadeja in the batting order also backfired when the left-hander was bowled by Hazlewood for two to leave the hosts reeling at tea.

Rahul, who top-scored with 90 in India’s first innings, put on 45 with Pujara after Abhinav Mukund (16) was bowled by Hazlewood early in the lunch session.

O’Keefe lured Rahul into a drive outside off stump and a diving Smith took a brilliant one-handed catch at first slip.

In the morning session, left-arm spinner Jadeja returned with figures of 6-63 to help dismiss Australia for 276 in their first innings, a lead of 87.

Australia lead the four-match series 1-0 after humbling the hosts in the first match in Pune.

Pakistan tour ‘more than cricket’ for Faf and Flower