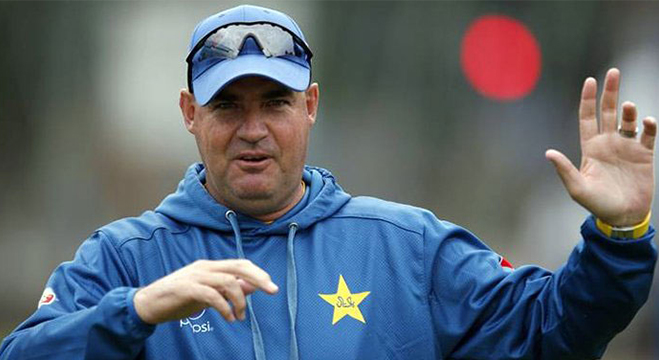 Dubai: Pakistan head coach Mickey Arthur admitted Australia will be a “dangerous” proposition in the second Test after they clung on for an improbable draw in a thrilling series opener in Dubai.

Australia put up a remarkable fightback to deny Pakistan victory on a wearing fifth day pitch, as they avoided defeat by holding on with just two wickets remaining.

Set a daunting 462-run target, Australia ended on 362-8 as opener Usman Khawaja anchored the recovery with a magnificent 141, ably assisted by debutant Travis Head (72) and skipper Tim Paine, who made 61 not out.

Arthur, who took the Pakistan job in May 2016, told AFP his team will be ready for a reinvigorated Australia in Abu Dhabi come the start of the second match on Tuesday.

“Of course Australia will be dangerous after the fight they put up, no doubt about that,” said Arthur. “But I am confident that we are playing good enough cricket and we will come harder.”

Arthur, who previously coached his native South Africa and Australia, said his players were hurting after blowing a great opportunity to take a 1-0 lead in the two-match series.

“For me it was really disappointing that we did not cross the line,” he said. “But the good thing for us is that it has hurt the players as if we have lost and that for me is a good sign.

“It shows that the boys are getting mentally tough and maturing and do not settle for second best any more, and that culture we want to create is getting through to our players and we will be raring to go in the second Test.”

Pakistan dominated the opening Test, compiling a first innings total of 482 on the back of centuries from Mohammad Hafeez and Haris Sohail after winning a crucial toss.

They then bowled Australia out for 202 with debutant off-spinner Bilal Asif taking 6 for 36 and fast bowler Mohammad Abbas 4 for 29.

“I think we have got to hand it to them, on a day five wicket with Yasir Shah and Abbas — two world class bowlers in your attack — we backed ourselves to win the Test.

“We can win nine times out of ten on a fifth day pitch but Khawaja played exceptionally well and Tim Paine played pretty well too and took away the game.”

Arthur conceded skipper Sarfraz Ahmed should have started with Abbas on the fifth morning, after the seamer jolted Australia with three wickets the evening before.

“I told Sarfraz that we should have gone with Abbas and Yasir but he had spoken to some senior players and they told him to bowl with Wahab Riaz.

“The reasoning they gave was that Wahab was supposed to bring that reverse swing into play and that there were some patches, but I think our best bowlers (Yasir and Abbas) should have been bowling early on,” said Arthur.

Arthur said the injury to opener Imam-ul-Haq, who suffered a fractured finger on the final day, was a big blow.

“Imam has been batting very well so it’s a loss,” said Arthur of Imam, who scored 76 and 48 in Dubai. “But that gives an opportunity to another player to show his talent.”

Fears grow for Ashes as pay row drags on – report