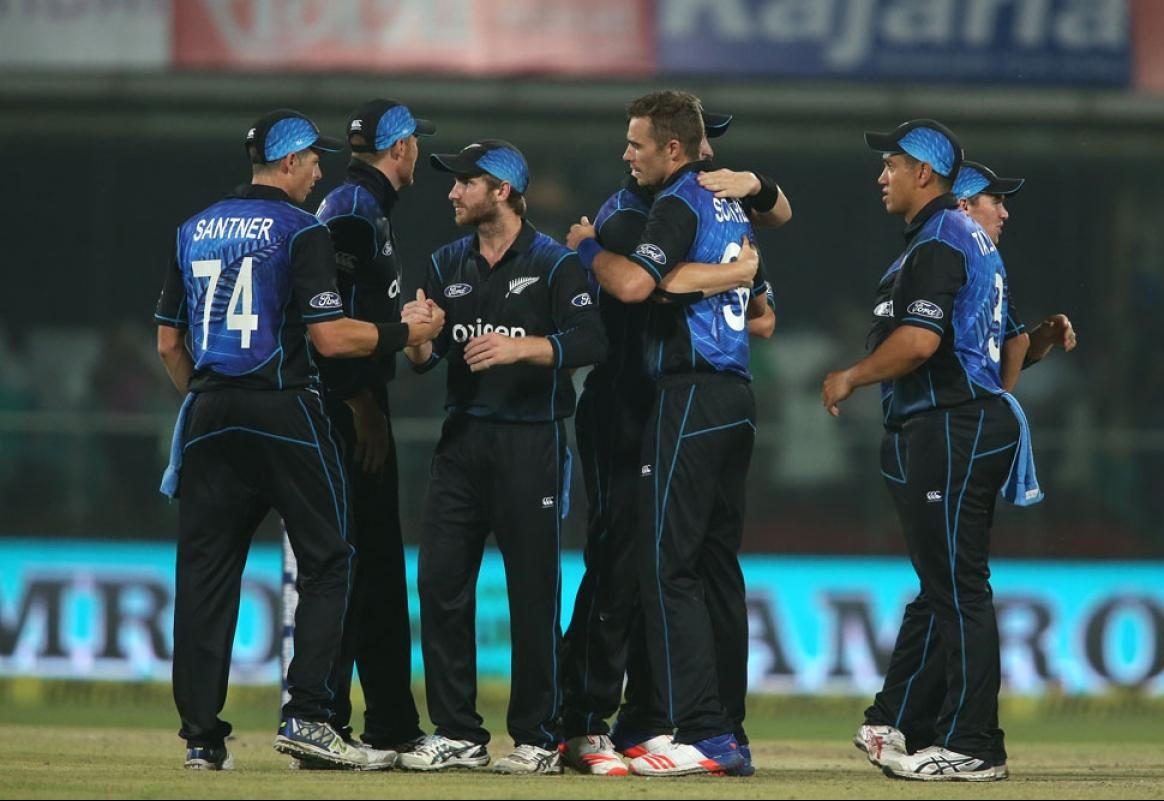 New Delhi: New Zealand bowlers pulled off a thrilling six-run win over India in the second one-day international after skipper Kane Williamson struck a dazzling century to help his side level the series 1-1 in New Delhi on Thursday

The hosts, who were chasing 243 for victory, were bowled out for 236 in 49.3 overs as Hardik Pandya’s fighting 36 went in vain. Speedster Tim Southee claimed three wickets.

Pandya, who starred with three wickets for India on debut in the Dharamsala ODI, looked like completing the chase during his 32-ball knock but Trent Boult got the dangerman in the penultimate over.

With India needing 10 in the final over and a wicket in hand, Southee got Jasprit Bumrah bowled for nought as the visitors celebrated their first win in the five-match series.

Boult’s excellent match figures of two for 25, including two maidens in his quota of 10 overs, was also key in New Zealand choking the Indian chase.

“A lot of credit to the way we bowled, to create pressure on that surface was key and Trent Boult was outstanding,” said Williamson.

New Zealand bowlers also came back strong to hurt India’s reply with early strikes as the hosts slipped to 73 for four.

Left-arm spinner Mitchell Santner got the big wicket of Virat Kohli (9) with wicketkeeper Luke Ronchi taking a great reflex catch down the leg side.

Skipper Mahendra Singh Dhoni (39) and Kedar Jadhav put on 66 runs for the fifth wicket in their effort to steady the Indian innings with their aggressive style of play.

Jadhav, playing only his ninth ODI for India, counter attacked during his 37-ball 41 as he hit 2 fours and 2 sixes before falling to Matt Henry.

Dhoni looked like anchoring the innings but a superb caught and bowled effort from Southee saw the back of the wicketkeeper-batsman as India slipped further.

Williamson turned to part-time spinner Martin Guptill, who took two wickets in his only over to get into the Indian tail.

But Pandya never gave up as he put on 49 runs for the ninth wicket with Umesh Yadav, who remained unbeaten on 18, as the duo gave the Black Caps a big scare.

“I feel this was one game where we lost wickets against the run of play, it was not that the deliveries were good, we just kept losing wickets,” said a disappointed Dhoni.

– The big stand -Batting first, Williamson and Tom Latham rallied to put on 120 runs for the second wicket as the duo tackled the Indian bowlers with aplomb.

Williamson, who was named the man of the match, led from the front with some assured stroke-making during his 128-ball knock, which was laced with 14 fours and a six.

He made the most of a major let-off when Dhoni failed to glove a deflection off Axar Patel’s bowling. Williamson was on 59.

Latham, who hit 6 fours and a six, played aggressive cricket to thwart the Indian spin and pace attack during his run-a-ball 46.

Off-spinner Jadhav broke the big stand after being brought into the attack in the 21st over as he got the left-handed Latham trapped lbw.

Williamson carried on the good work to record his eighth ODI ton as the crowd at Delhi’s Feroz Shah Kotla stood up to applaud the efforts of the opposition captain.

“I think we bowled really well, after the new ball it was key to get reverse swing and put pressure on the batsman, Mishy (Mishra) bowled well and got crucial wickets,” said Dhoni.

Medium-pacer Bumrah’s triple strike in the final five overs of the innings also hurt the visitors’ chances of putting up a bigger total.

The teams now head to Mohali for the third match on Sunday.

Smith back in Australia to win back trust after tampering scandal

ICC launches #Worldwidewickets to celebrate cricket around the world