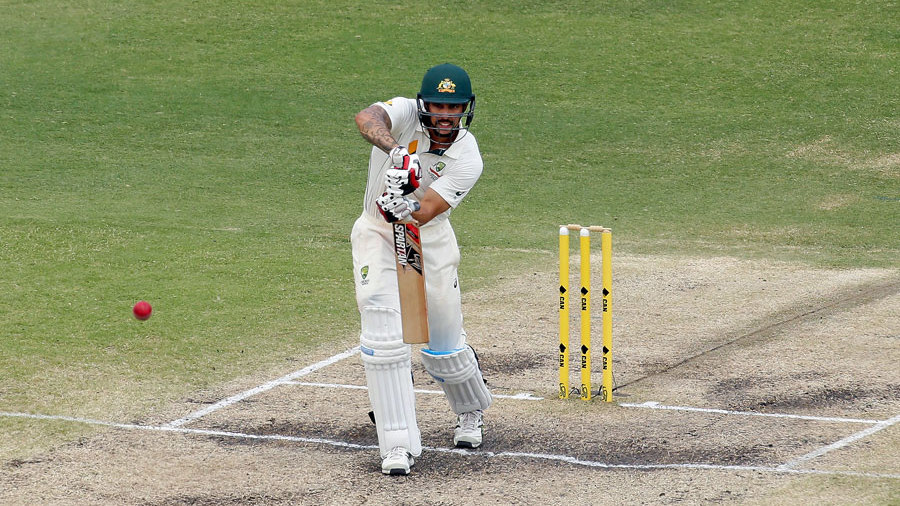 The Australians had one hand on the Trans-Tasman Trophy at tea on the final day at the WACA, where Steven Smith set New Zealand a hefty target before rain forced an early end to the second session. Smith did New Zealand no favours by delaying his declaration and set them 321 for victory from a minimum of 48 overs, and when the shower sent the players from the field to take an early tea they had managed 0 for 28 from 8.2 overs, with Tom Latham on 15 and Martin Guptill on 13.

The spectators had at least had a chance to see Mitchell Johnson bowl on his last day as an international cricketer, but his first eight deliveries – he was partway through his second over when the rain arrived – were fairly uneventful. It seemed unlikely the rain would stay for too long, but a draw was already by far the most likely result, which would be enough for Australia to retain the Trans-Tasman Trophy having won the first Test in Brisbane.

Smith’s declaration came with just over an hour left until tea. Australia were at 7 for 385 when he called in his batsmen, Mitchell Starc on 28 and Josh Hazlewood on 2, with the injured Usman Khawaja not having been required to bat. Australia added 54 after the lunch break for the loss of two further wickets as Tim Southee finished with 4 for 97.

Johnson struck five fours during a breezy stay in which he scored 29, but his innings ended when he edged behind an attempted pull off Southee. It was a farewell cameo with the bat for Johnson, but with Australia needing 10 wickets in 48 overs, his real job was still to come. Peter Nevill shepherded the innings through its late stages and made a steady 35 off 83 balls before he was caught behind driving at an outswinger from Southee. A few lusty blows from Starc then satisfied Smith that Australia were unlikely to lose.

Earlier, New Zealand’s bowlers put in one of their strongest performances of the series before lunch but it was insufficient to really build the pressure on Australia. The hosts added 73 during a slow-moving first session in which the loss of centurions Smith and Adam Voges led to a more cautious approach from the home side.

New Zealand arrived at the WACA knowing that their best chance was to take the declaration decision out of Smith’s hands by running through the batting order and the fast bowlers did their bit by finding swing and zipping the ball around off the pitch. New Zealand had managed only one maiden on the first day of this match but here so many dots started to accrue that the scorecard looked like a pointillist painting.

Trent Boult struck the first blow when he nipped one away from Smith, who edged behind for 138, having added only seven to his overnight score. Mitchell Marsh failed to take the opportunity for some time in the middle when he was lbw for 1 to a ball moving in from Doug Bracewell, who was the best of New Zealand’s bowlers but managed just the one wicket for the session.

Southee claimed the other when he had Voges trapped lbw for 119, umpire Nigel Llong’s decision upheld after Voges asked half-heartedly for a review. That brought Johnson to the crease through a guard of honour formed by the New Zealand players, a poignant moment, on an emotional day for Johnson and his family.

Wisden honour for McCullum and Williamson