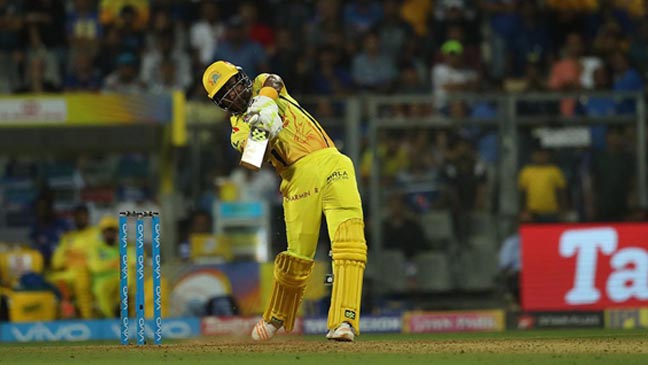 In a match befitting of a clash between two of the best sides in the Indian Premier League, the Chennai Super Kings held their nerve to defeat the defending champions Mumbai Indians in the opening game of IPL 2018. Set a target of 166, CSK were down and out for all counts when they were reduced to 118-8.

When everything appeared lost to CSK’s cause, Dwayne Bravo turned the match on its head through an incredible blitz. His dismissal at the end of the 19th over, with his team needing a further 7 runs, swung the pendulum in favour of MI once again. Kedar Jadhav (24 not out from 22 balls), who had retired hurt earlier in the innings after injuring his hamstring, returned at the fall of Bravo’s wicket; he played out three dot deliveries before scooping the fourth ball for a six over fine-leg. The following delivery, stood on one leg, he drilled the ball through the off-side to lead CSK to a famous win. CSK prevailed by 1 wicket, getting over the line with one ball to spare.

Courtesy CSK’s thrilling win, MI’s run of not winning the season opening match went up by one; they have not won the opener in 6 seasons now.

Dwayne Bravo waged a lone battle and converted what looked like a certain defeat into a win. The Trinidadian walked out to bat in the twelfth over, at which stage the score read 75-5. He watched his team slip further to 118-8 when Mark Wood was dismissed in the seventeenth over.

That’s when he decided to take matters into his own hands. In the following over, he got stuck into Mitchell McClenaghan in what can be identified as the turnaround over; Bravo hit the left-arm pacer for 6, 4, 2& 4 and collected a single off the final ball. CSK were suddenly back in the race.

In the following over, Bravo hit the first two deliveries bowled by Jasprit Bumrah into the stands, and did that a third time later in the over. He was dismissed off the last ball of the 19th over, when he picked out the fielder at extra cover. But his 68 – made from 30 deliveries & studded with 3 fours and 7 sixes – had brought CSK to the brink.

Earlier in the evening, the Mumbai Indians innings had three batsmen making 40s – but the one knock that had the biggest impact was Krunal Pandya’s unbeaten 22-ball 41. The left-hander came in to bat with 32 balls remaining in the innings; he dominated the strike, collected boundaries with ease and took MI to what was nearly a match-winning total on the night. Krunal opened his account with a boundary through cover. He thereafter got stuck into Mark Wood, whom he hit for 17 runs in the seventeenth over of the innings and 16 runs in the nineteenth over of the innings. Against the remaining bowlers, Krunal only managed to score 8 runs off 12 balls.

Suryakumar Yadav and Ishan Kishan rescued the Mumbai Indians, who had just 20 runs on the board when the openers were dismissed, through a 78-run partnership. Playing on his home ground, Yadav opened his account with a sweetly timed square drive and never looked troubled when there was pace on the ball. He deposited Shane Watson into the stands at midwicket with an elegant flick and then collected a hat-trick of boundaries off Dwayne Bravo. He made 43 off 29 balls before his dismissal at the hands of Watson in the 13th over.

Ishan Kishan took a liking for Imran Tahir, whom he hit for 4, 6, 4 and collected a total of 17 runs in the eleventh over. He fell victim to the same bowler too, but not before he had made 40 from 29 balls.

There were two bowling spells that stood out in the Mumbai Indians innings; Deepak Chahar was impressive with the new ball and repeatedly troubled the MI captain Rohit Sharma. Chahar bowled only three overs in the powerplay and returned with excellent figures of 3-0-14-1. At the fag end of the innings, Dwayne Bravo did what he knows best; he used variations in speed and even dished out yorkers on a couple of occasions to deny the batsmen. Bravo conceded only 7 runs bowling the 18th and 20thovers of the innings.

The most-impressive spell though has to be that of Mayank Markande, who finished with figures of 4-0-23-3. The debutant leg-spinner, brought into the attack in the seventh over, struck twice in his first two overs; with his third delivery, he dismissed a well-set Ambati Rayudu leg before wicket, and then in his next over, he comprehensively deceived MS Dhoni with a well-set googly and trapped him LBW. The 20-year old ended the night dismissing Deepak Chahar with the last delivery of his spell – this one yet another googly which sailed in the huge gap between bat and pad for the wicketkeeper to complete an easy stumping.

Shane Watson was the pick of the bowlers for CSK; the Australian picked up the wickets of Rohit Sharma and Suryakumar Yadav. For MI, Hardik Pandya dismissed Watson in the fourth over and then collected the big wicket of Suresh Raina in the sixth over; in his final over, he had Mark Wood hit a leg-stump delivery down the throat of fine-leg. Hardik finished with figures of 3-24 – his best returns in the IPL.

40 runs were added to the CSK total in the 18th& 19th overs; Bravo had scored 39 from 11 balls, while Imran Tahir had scored just the solitary run from the one ball he faced.

Asif Ali off to US for daughter’s cancer treatment