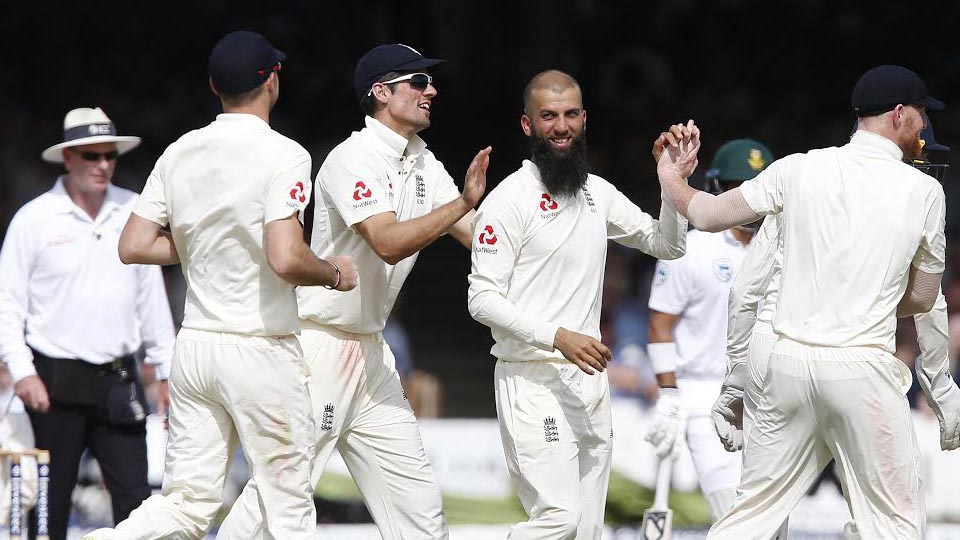 London: Moeen Ali became the fifth-quickest player in terms of matches played to do the Test ‘double’ of 2,000 runs and 100 wickets when he completed the feat against South Africa at Lord’s on Friday.

Worcestershire’s Ali, started the second day of the first Test with 1988 runs and 98 wickets at this level.

The left-handed batsman took care of the first part of the ‘double’ by extending his overnight 61 not out into a dashing 87 in England’s first innings 458.

Primarily a batsman, until England deployed him as more of an off-spinner, the 30-year-old Ali has often been criticised for not being a ‘front-rank’ bowler.

Yet on Friday he produced a sharply turning off-break to have star batsman Hashim Amla lbw for 29.

Ali then removed South Africa captain Dean Elgar, who had been holding the innings together, for 54 when the opener was caught off bat and pad by Gary Ballance at short leg.

Elgar’s exit left the Proteas in trouble at 98 for three.

It also meant Amla had done the ‘double’ in his 38th Test, with only the late Tony Greig, who took 37 matches, achieving the feat in fewer fixtures for England.

Langer hopes Australia will be better for ‘brutal’ England loss