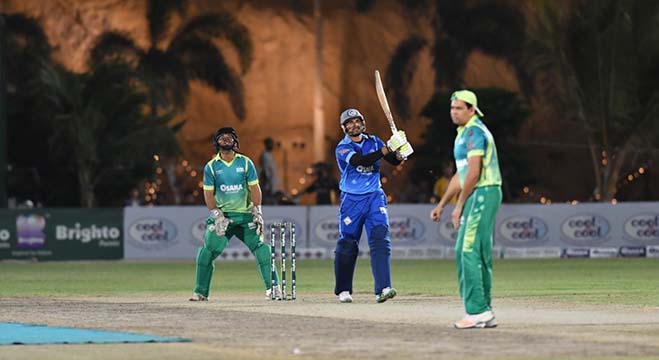 Batting first the Pakistan Currency’s Zakir Malik ripped KPT bowling apart and raced to the first century of the event in a flash. He consumed just 34 deliveries for the ton and got out after hammering 107 off 40 balls. Malik exhibited unbelievable power-hitting ability by smashing 10 towering sixes and 9 fours. Junaid Ali had a useful contribution of 69 runs as well and Pakistan Currency posted 239, the highest aggregate of the tournament so far, on the board.

In reply the openers gave some hope to the KPT fans with the quick 62-run stand while the second-wicket partnership propelled the KPT beyond the 100-run mark but then the mini collapse put breaks on the scoring rate. After losing half the side for 149, the KPT managed to reach 188 for 7 wickets in 20 overs with notable contributions from Nadeem Javed (40), Sajjad Hashmi (38) and Rehan Tanoli (37). Pakistan Currency’s skipper Iftikhar Ahmed picked up 3 and fast bowler Imran Khan grabbed 2 wickets. The master-blaster, Zakir Malik was declared man of the match.

The second encounter, of the day, was a heartbreaker for Misbah-Ul-Haq’s fans. The legendary former Pakistan captain led his side, Saima Builders, in a bid to avoid the second consecutive loss in as many matches.

Batting first, Saima Builders’ Imran Nazir started off in his trademark fashion and hit a few big shots. He got out on 34 with 3 sixes and 3 fours and soon the second batsman also perished. Misbah-ul-Haq held one end and steadied the innings. The veteran wasn’t looking in supreme touch but he kept things in check. Misbah stayed till the end, scoring 45 off 42 balls with 2 fours and Saima Builders put 154 for 6 on the board. Fazal Subhan contributed with 27 runs. Usman Qadir bagged 2 scalps.

In reply Omar Associates lost Usman Khan in the first over, through a sharp in-swinger by Ehsan Adil.

Saima Builders could not capitalise on the early success and Omar Associates took control from there on, courtesy Sohail Akhtar who played some delightful strokes for a quick half century. He put Omar Associates well on course to victory by scoring 56 runs off 40 balls.

On Thursday, KPT will face State Bank while K-Electric will lock horns with Santex Group.

Williamson leads Sunrisers to top of IPL in Warner’s absence