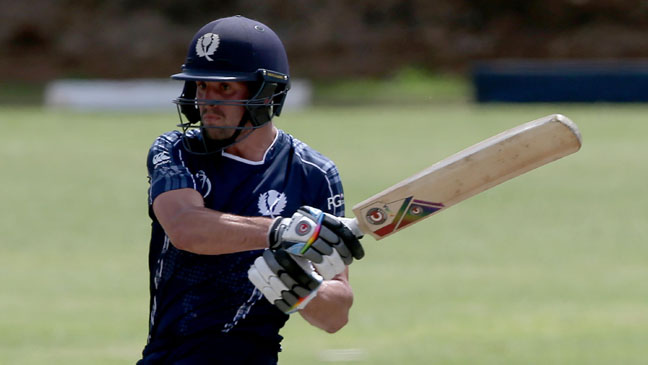 Harare: Calum MacLeod struck a magnificent 157 not out as Scotland stunned Afghanistan by seven wickets in their opening 2019 World Cup qualifier at Bulawayo on Sunday.

Afghanistan, one of the pre-tournament favourites to qualify, made 255 all out batting first, but MacLeod hammered 23 fours and a six in his blistering 146-ball knock to lead Scotland to victory with 16 deliveries remaining.

“The standout (performance) for us today is MacLeod,” said Scotland captain Kyle Coetzer.

“It was an unbelievable effort from him. It’s a great start to the tournament but we will take every day as it comes.

“We need to pick ourselves up again and get ready and raring to go against Hong Kong.”

Hosts Zimbabwe lead the early Group B table, though, after their 116-run thrashing of Nepal, while the United Arab Emirates and Ireland got off to winning starts in Group A against Papua New Guinea and the Netherlands respectively.

The 10 teams in Zimbabwe are fighting it out for only two places alongside the world’s top eight ODI sides at next year’s World Cup in England and Wales.

But Richie Berrington joined MacLeod at the crease as the pair put on a 208-run stand to see off Afghanistan and gain a measure of revenge for their narrow defeat by the same opposition at the 2015 World Cup.

Rising star Rashid Khan, the first teenager to captain a men’s international side, was attacked by MacLeod and conceded 68 runs from his nine overs.

The 19-year-old finally ended the partnership by trapping Berrington lbw, but by then the game was gone and Afghanistan will have to bounce back against Zimbabwe on Tuesday, with only the top three teams from each group to reach the Super Six stage.

Earlier, Afghanistan had recovered from 71-4 to post a challenging total thanks to 92 from all-rounder Mohammad Nabi and the big-hitting Najibullah Zadran’s 67.

Elsewhere, Zimbabwe restored some confidence after their 4-1 series defeat by Afghanistan last month by crushing Nepal as both Sikandar Raza and Brendan Taylor hit hundreds.

Wicket-keeper Taylor managed an even 100, but the headlines were grabbed by all-rounder Raza’s 66-ball 123 that featured nine maximums.

Nepal battled bravely in reply but never threatened Zimbabwe’s massive total of 380-6, as Raza added 3-48 with his off-spin in a virtuoso individual display.

Ireland, who have beaten Pakistan, England and the West Indies over the last three World Cups, got off to an impressive start with a comfortable 93-run win in a weather-shortened game against the Dutch.

Andy Balbirnie’s 68 led the Irish to 268-7, before Tim Murtagh took three wickets as the Netherlands slumped to 149 all out in pursuit of 243 from 41 overs.

The UAE, who gave two-time world champions the West Indies a scare in a warm-up match earlier in the week, had little trouble in brushing aside Papua New Guinea to edge ahead of Ireland at the top of Group A on net run rate.

The Windies get their Group A campaign underway against the UAE on Tuesday.

Scores from the first day of 2019 World Cup qualifying in Zimbabwe on Sunday: