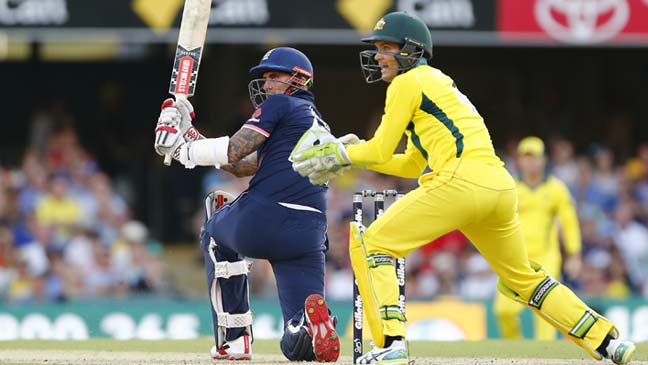 Brisbane: England turned in an impressive all-round team performance to beat Australia by four wickets in the second one-day international at the Gabba on Friday.

After restricting Australia to 270 for nine from their 50 overs, the English cruised past the total with 5.4 overs to spare.

“On a really hot day they coped very well.”

All of England’s batsmen contributed to the run chase, which was always in control following a 117-run second wicket partnership between Jonny Bairstow (60) and Alex Hales (57).

Joss Buttler (42), Morgan (21) and Chris Woakes (39 not out) all made handy contributions, while Joe Root held the innings together with a measured 46 not out.

“We did enough to win,” Morgan said, adding: “It’s far from our best performance with the bat.

“I suppose that’s exciting in a way. We’re two-nil up in the series and we’re still looking for a complete performance as a batting unit.

“Hopefully that comes in Sydney in Sunday.”

The Australians went into the match without leg-spinner Adam Zampa, who proved expensive in the opening ODI in Melbourne on Sunday, opting for batsman Cameron White instead.

However, the decision to go into the match without a recognised spinner proved costly on a pitch that helped the slow bowlers.

Finch, who blasted his 106 from 114 balls, helped Australia get away to a quick start alongside David Warner.

The burly opener looked like he was leading Australia to a score well past 300 but his dismissal, soon after that of Mitchell Marsh, ensured England were able to keep the Australian scoring under control.

Finch and Warner both dominated the English fast bowlers, who pitched too short on the Gabba wicket.

England captain Morgan turned to his spinners with immediate effect.

Moeen Ali had Warner caught at slip for 35, bringing Steve Smith to the crease.

The Australian captain struggled to 18 from 25 balls before part-time off-spinner Root trapped him lbw.

Root then enticed Travis Head into charging down the wicket, only to chip a return catch to the bowler to leave the Australians on 124 for three.

Marsh and Finch consolidated but the scoring rate slowed as they struggled to get Ali, Root and leg-spinner Adil Rashid away.

The Australians then lost three wickets for nine runs to allow the English to take control.

Debutant Carey made a quickfire 27 before he was brilliantly run out by Woakes, who used his football skills to kick the ball into the stumps as the batsman attempted a quick single.

Woakes then had Mitchell Starc caught in the deep before running out Andrew Tye on the last ball of the innings.

“We’re not playing good enough one day cricket at the moment,” he said.

“That’s not enough against a quality English batting line up.”

Cook to retire from international cricket after India series

Iyer shines as India A struggle against Aussies