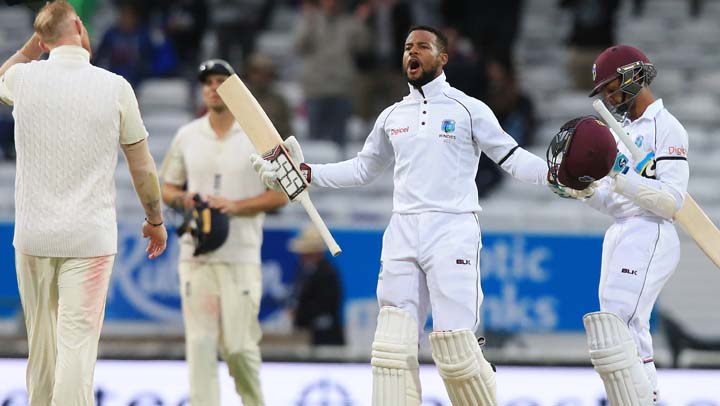 Leeds: Shai Hope led the West Indies to a remarkable five-wicket victory over England in the second Test on Tuesday as he became the first batsman to score two hundreds in a first-class match at Headingley.

The West Indies, set a seemingly imposing 322 for victory, finished on 322 for five with 28 balls to spare.

Hope, elegant through the offside and assured off his legs, was 118 not out following his first-innings 147.

Having not scored a hundred in any of his previous 11 Tests, the 23-year-old Barbados batsman had two in the one game.

Victory saw West Indies level the three-match series at 1-1 as they recorded their first Test win in England since 2000.

It was all the more impressive given that just over a week earlier they’d suffered an innings and 209-run defeat inside three days in the first Test at Edgbaston.

This was also, excluding fixtures against Bangladesh and Zimbabwe, just the West Indies’ fourth Test win away from home in 88 matches spanning 20 years.

Together with opener Kraigg Brathwaite (95), Hope put on 144 after the pair had shared a stand of 246 in the first innings, with Brathwaite making 134.

The West Indies resumed on five without loss after England captain Joe Root had declared late on Monday with England 490 for eight in their second innings.

Only Australia, with 404 for three back in 1948, had made more to win in the fourth innings of a Headingley Test.

Yet on a day of astonishing statistics, one of the more incredible was that Anderson went wicketless while conceding 73 runs in 24 overs.

In a match where dropped catches had cost the West Indies 238 runs, there was further drama when normally reliable first slip Alastair Cook floored Brathwaite, yet to add to his overnight four, off Stuart Broad.

But Broad did reduce the West Indies from 46 for none to 53 for two.

He had Kieran Powell (23) fending to Ben Stokes at fourth slip and then ran out Kyle Hope, Shai’s older brother, for the unluckiest of ducks when he dropped a return catch from a hard-hit Brathwaite drive only to deflect the ball onto the stumps at the bowler’s end as the non-striker backed up.

But it was not until the stroke of tea that West Indies lost their third wicket when Brathwaite edged off-spinner Moeen Ali to Stokes at slip.

Brathwaite’s 180-ball innings, including 12 fours, meant the opener had batted for more than 10 hours in the match.

England took the new ball with West Indies 266 for four off 80 overs and gave it to Anderson.

But Blackwood’s response, with the Headingley floodlights shining bright on a gloomy day, was to loft Anderson’s second delivery with the new ball for a stunning straight six.

Hope pushed Broad for a single to complete a superb century off 175 balls, including 13 fours, as he achieved something no one else had managed in 127 years of first-class cricket at Headingley — a ground that has been home to such Yorkshire and England batting greats as Herbert Sutcliffe, Len Hutton and Geoff Boycott.

He was also the first West Indies batsman to score hundreds in both innings of a Test in England since Gordon Greenidge at Old Trafford in 1976.

England’s plight was summed up when Cook dropped Shai Hope on 106.

Blackwood, who uppercut Broad for six over third man, tried to win the match in the grand manner. But having removed his helmet, he was stumped off Ali for 41, having put on a vital 74 with Shai Hope.

Appropriately, it was Shai Hope who struck the winning runs with a legside flick for two off Chris Woakes.