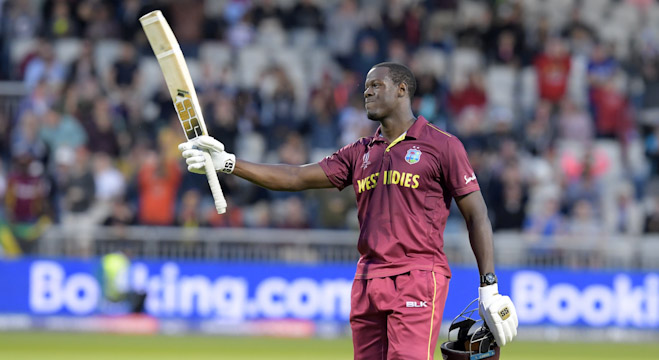 The West Indies were down and out at 164-7, chasing a target of 292 to beat the Black Caps at Old Trafford.

Thanks to Brathwaite’s blistering 101 of 82 balls — his maiden one-day international century — however, they got to within a six of a win with just one wicket standing.

But Brathwaite, trying to hit what would have been his sixth six of a remarkable innings, fell to paceman Jimmy Neesham as Trent Boult took a good catch just inside the long-on boundary off the last ball of the penultimate over.

New Zealand won by a mere five runs, a result that effectively ended the West Indies’ hopes of semi-final qualification.

All-rounder Brathwaite was previously best known for his last-over heroics in hitting four successive sixes off Ben Stokes to see the West Indies to a dramatic 2016 World Twenty20 final win over England in Kolkata.

Yet for all his power, Saturday’s innings was only the second time he had made fifty or more in an ODI, with the 30-year-old’s top score in 37 previous matches at this level an innings of 50 against England at St George’s earlier this year.

“His work ethic is really good,” said Holder. “He’s not one to shy away from his responsibilities. And he puts a really good effort into his preparation. The knock he played today is not surprising to me.”

Holder added: “I guess everybody could sit here and agree that we’d love to see that a little bit more often. But that’s the general feeling within the entire group.

“I think as a team we just need to be a lot more consistent.”

“All the hard work I’ve been putting in, it’s finally good that it comes to fruition,” he told reporters.

“I’m obviously devastated not to get over the line, but also giving thanks for the performance. Even getting the team into the position we got into before I got out,” Brathwaite added.

Brathwaite dominated a last-wicket stand of 41 with Oshane Thomas, who remained unbeaten on nought, to give New Zealand a real scare after veteran opener Chris Gayle had launched the chase with a typically blazing 87.

“Everyone believed we could get over the line,” said Brathwaite.

“The fight the lower order showed was commendable.”

Brathwaite sank to his knees in despair after getting out.

New Zealand, sportingly, tried to console him in a match where their captain, Kane Williamson, had laid the foundations for victory with a career-best 148 — his second successive World Cup century.

“The New Zealanders are some of the best people in the world,” said Brathwaite. “I’m fortunate to have shared a dressing room or play against and socialise with them in franchise tournaments

“It was good sportsmanship on their behalf. I appreciated the mutual respect the opposition had,” he said with a smile.

West Indies, champions in the first two editions of the World Cup 1975 and 1979, have just one win from six games at this edition and they next face an unbeaten India in Manchester on Thursday.

Bangladesh to deport five Indians for betting on cricket