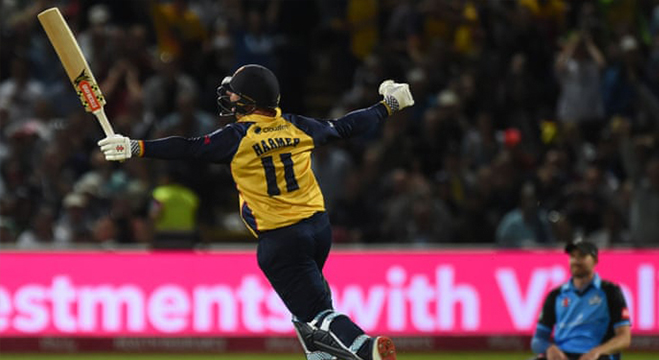 Birmingham: Essex captain Simon Harmer produced a match-winning cameo with the bat to lead his team to victory over Worcestershire on the final ball of Saturday’s T20 Blast final.

All-rounder Harmer took three for 16 including the key wicket of Moeen Ali as Essex restricted defending champions Worcestershire to 145 for 9 after winning the toss and bowling at Edgbaston.

Essex’s title ambitions looked in tatters when Moeen dismissed Ryan ten Doeschate and Dan Lawrence in quick succession to leave them 82 for 5 in the 14th over.

But Ravi Bopara, who made 36 off 22 balls, revived their hopes to leave Essex requiring 12 off the final over.

They managed just six from the first four balls against Wayne Parnell before Harmer smacked his compatriot for successive boundaries to propel Essex to a thrilling win.

County Championship leaders Essex will look to complete a double when they host second-placed Somerset in the final round of first-class matches next week.

Worcestershire, who beat Sussex to lift the title in 2018, returned to the final following a dramatic one-run victory over Nottinghamshire in Saturday’s first semi-final.

Ben Duckett, who made an unbeaten 49, needed just a single from the final ball to level the scores and give Nottinghamshire victory by virtue of losing fewer wickets, but he missed a heave across the line off Parnell.
Essex defeated Derbyshire by 34 runs in the other semi-final.

To hit or not to hit? Finch faces dilemma for Test debut