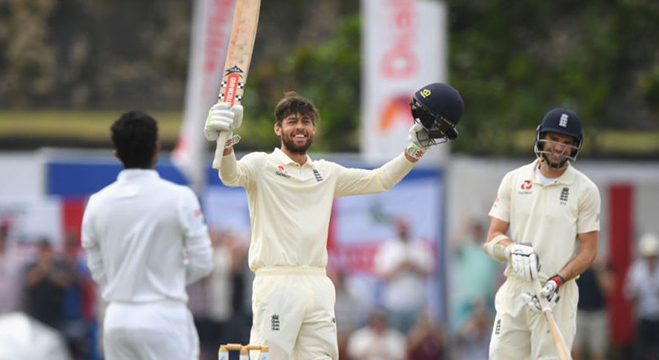 In some ways the most surprising thing about the first day of the first Test between Sri Lanka and England at Galle was that there was any play at all. Heavy overnight rain seemed likely to cause at the very least a significant delay, and more rain was forecast. In fact play started on time a d was uninterrupted. in fact the overrate was such that, most unusually, 91 overs were bowled in what turned out to be a keenly contested day.

The fact that so many overs were bowled was consistent with one predictable element of the game – the predominance of spin. Sri Lanka picked only one seamer , the reliable Suringa Lakmal. England picked their three leading spinners, so there was no room for Stuart Broad. James Anderson will however be supported by Ben Stokes and Sam Curran ; there were times on the first day when Sri Lankan captain Dinesh Chandimal seemed to be casting about for someone to throw the ball to.

That is not to say that the Sri Lankan spinners under-performed exact,y. But Akila Dananjaya, in many ways the most exciting of the local spinners, because of all his variations, after a threatening openi g spell, became increasingly expensive. Rangana Herath’s -strangely delayed – appearance at the bowling crease was accompanied by a burst of celebratory fireworks, but the great man could produce no pyrotechnics. of his own. As always, though, he allowed Chandimal to retain a measure of control. As si often in recent years it was Dilhuran Perera , opening the bowling with Lakmal, who caught the eye. He finished with four wickets.

It was Lakmal who posed the initial threat , dismissing debutant Rory Burns and Moeen Ali with successive deliveries: Ali’s leg stump spectacularly removed by a brilliantly fire ted ball. There followed a partnership between Keaton Jennings and Joe Root that was never wholly convincing. There were some lovely strokes – Root’s driving was sumptuous – and they certainly got the home side in something of a state; by the twelfth over Sri Lanka had lost both of their reviews, mainly thanks to misjudgements by their excitable wicketkeeper, Niroshan Dickwella.

On the other hand, by lunch England had lost five wickets, with just over a hundred on the board. Four of the five were bowled, which must say something.

Root had spoken before the match about adopting a positive attitude, and of course that is to be commended. But one cannot help wondering, at least sometimes, if England’s top order have simply forgotten how to build a Test innings. Five days is quite a long time after all. Both Root, leaping needlessly down the track to Herath, and Stokes, stepping across his stumps to sweep Perera, got themselves out.

Debutant Ben Foakes, who was playing because Jonny Bairstow had been ruled out with an ankle injury. found himself batting – at number seven – just before lunch. He was still there at the close with 87 not out off 184 deliveries, England having reached 321 for 8.
Of course he could not do it all by himself. There were stands of 61 with Jos Buttler, 88 with Sam Curran ( 48) and 54 with Adil Rashid. Each of them played an innings of real character:: we are getting used to that from Curran. But it was Foakes who really caught the attention. Right from the start he made you think he knew exactly what he was doing. He built an innings in the traditional way and looked very good while he was doing it.

More than that , he put England if not in a commanding position, then in a much better position than they could reasonably have expected to be at the end of the first day in a Test at Galle. With Chandimal suffering from a groin strain, there is little doubt where the advantage lies.

Shadab stars on debut as Pakistan ease past Windies