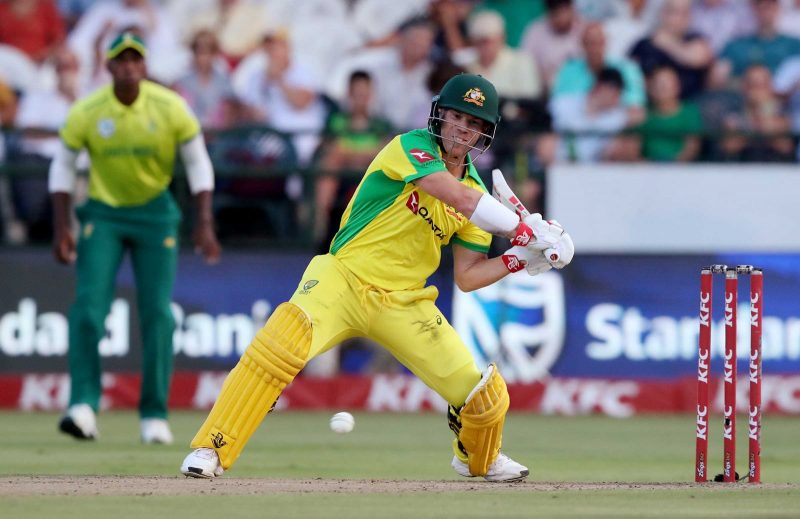 David Warner says he’s as fit as he’s ever been and pinpointed the 2023 one-day World Cup in India as his “ultimate goal”, but is coy about committing to a return to the KFC BBL this summer.

Australia potentially face a heavy schedule once international cricket resumes, with male players returning to training next week at the end of their annual leave period.

With lockdown restrictions beginning to ease, hopes are growing for Australia’s summer schedule, while the international calendar will be reshaped by the influence of COVID-19.

It could be a punishing schedule but Warner, who has long credited his wife Candice, the former Ironwoman competitor, with improving his commitment to fitness training, feels well-placed to tackle the fixturing bottleneck.

“In the last three years I’ll have had almost two years off, depending on when we play cricket again,” Warner said.

“The longevity in your body helps. The get ups of training and playing gets harder as you get older but I haven’t felt any fitter in my career than I do now.

“As the legs get older time will tell. At the moment I’m feeling as fit as a fiddle and if I can keep running between wickets as well as I have done, who knows. That (2023 ODI) World Cup is the ultimate goal.”

Australia hope to host a T20 World Cup, a Test against Afghanistan and the marquee Test series against Virat Kohli’s side, while white-ball games against India (home) and New Zealand (home and away) are also on the ICC’s Future Tour Programme for this summer.

A return to South Africa looms in February, their first Test tour of the Rainbow Nation since the ball-tampering nadir in 2018, with a backlog of rescheduled ODI and T20 matches against the Black Caps and the postponed two-Test tour of Bangladesh also to fit in.

This winter’s limited-overs tour of the UK and top-end matches against Zimbabwe are yet to have their fate decided.

Australia’s most high-profile, three-format players such as Warner, Steve Smith and Pat Cummins are also waiting for this year’s IPL to be rescheduled after it was postponed indefinitely last month due to the coronavirus.

Warner will wait to see what how the summer schedule pans out before making a decision on whether to end his seven-year absence from the BBL.

His last Big Bash game was a Sydney derby between the third and fourth Ashes Tests in the 2013-14 summer, and the big-hitting opener who shot to fame through T20 says he found the format switching problematic.

“All my decisions are based around how much playing and touring I’m doing in the summer,” Warner said of his Big Bash options.

“When I last played a game, my mindset in next two Tests was cluttered between playing and not playing shots.

“I know that’s how I play but I’ve reined it in a lot over the last few years and don’t want to be putting myself into a situation again where I’m playing a Test match and then a T20 and then Tests again a few days later.

“I just want to have that one rhythm going into it.

“It would be easy to sit here now and say ‘Yes, I’d like to play’ but I have to see what is happening at the end of the year. I’ll have to have a hard think about it depending on the schedule.”

Warner had hit centuries in the first and third Ashes Tests of that whitewash summer, before he hit 50 from 31 balls for the Sydney Thunder in a one-off appearance. In the final two Tests of the summer he did not pass 25.

Creating a window in January for Australia’s international stars to play in the BBL has been reported to be among options raised for consideration by the independent report on the state of the game prepared for Cricket Australia by former television sport executive Dave Barham.

Warner, who’s previously hinted he might step away from the shortest format to prolong his Test career, said stepping away after next year’s T20 World Cup in India would be a good time for selectors to blood new talent with an eye beyond the 2023 World Cup.

“If you’re playing as good as you can and doing the best you can for the team and you’re helping and benefiting them, I think you do want to keep playing as long as you can,” Warner said.

“There’s back-to-back Twenty20 World Cups, and I started my career with Twenty20 cricket, and I think it’s important we’ve got younger kids coming through and they get a sniff and a chance of playing at this level as well.

“I was fortunate enough to get this opportunity through Twenty20 cricket and I think it’s a great base, a platform for these kids to get under some pressure and learn about what it’s like to play and train at this level.

“We’re seeing a lot of guys and talent coming through Australian cricket (and) I think it’s important we’re leaving those opportunities open there.”

If events stick to their current schedule, Australia will host a T20 World Cup in October and November, before the tournament is contested again in India 12 months later (a replacement for the now scrapped 50-over Champions Trophy tournament).

“At that stage you will probably get two spots open up in the team with me and Finchy (Aaron Finch),” Warner said.

“He wants to go to that World Cup in three years’ time as well, so there’s going to be a few spots available after that.

“It gives us time to nurture those guys coming through and gives the selectors time to pinpoint as who they want as openers for Australian cricket.”

Finch and Warner were born only three weeks apart, and both would be 36 at the next one-day World Cup.

Kohli plays down ‘banter’ as tempers flare in Perth

It’s back! Australian cricket to resume on Saturday