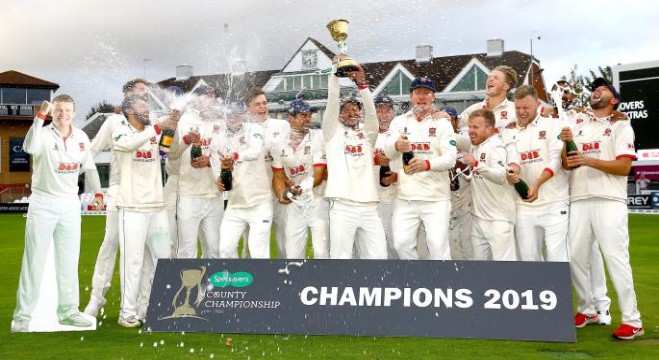 London: Essex won England’s County Championship for the second time in three years after holding off a spirited charge by Somerset on the final day of the season on Thursday.

After over 200 overs had been lost over the first three days of the match, second-placed Somerset needed to take 20 Essex wickets on the final day for an improbable first ever County Championship title after making 203 in their first innings.

Essex were cruising to a double — after also winning the T20 Blast last weekend — when former England captain Alistair Cook saw them beyond lunch for the loss of just one wicket.

Somerset then forfeited their second innings in the small hope of skittling Essex out again for less than 62.

However, Cook saw his side through with 30 not out before the teams shook hands on a draw with Essex 45-1.

“We knew it was going to be a dogfight with the state of the wicket,” said Essex captain Ryan ten Doeschate.

“We knew it was prodigiously turning and needed some calm heads at the end there.

“I wasn’t nervous, but you never know when the wicket is spinning like that.

Another former England great, Marcus Trescothick, also made a fleeting farewell appearance when he came on top field for the final few overs.

Trescothick, 43, was playing for the final time for Somerset after a 26-year stay but had to settle for second in the Championship for the fifth time in 10 seasons.

England coach urges Buttler to stay out of trouble