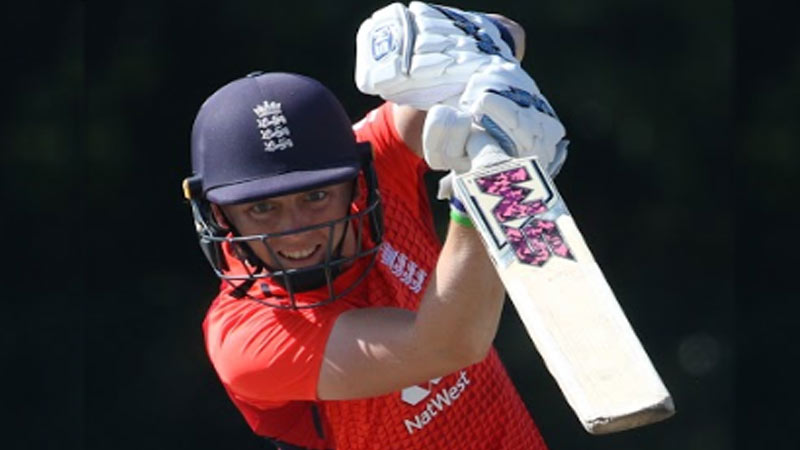 After winning the toss and electing to bat, England captain Heather Knight scored a quickfire 31-ball 43 which helped her side post an impressive 170 for three.

Knight’s 81-run partnership for the second-wicket with Amy Jones (37 off 35) was instrumental in giving England a firm grip of the innings after opener Danni Wyatt – who hit two fours and two sixes in her 15-ball 25 – was dismissed by Umaima Sohail, who returned one for 18 in three overs.

For her batting performance, the England captain was named player of the match.

Heather Knight said: “I think it’s been a good tour for us. We asked the batters to get big runs and that’s happened across both the ODI and the T20I series.

“I think we’ve found some new players, as well. Sarah Glenn has really put her hand up and that’s great for us, it adds to the competition for places and makes us stronger as a group.

“I’ve been proud of how we’ve maintained our high standards, especially in the field – which is something we’ve been working hard on.

“We’re looking forward to the new year and the challenge of the ICC Women’s T20 World Cup in Australia.”

An unbeaten 52-run stand between Fran Wilson and Tammy Beaumont in the last 5.4 overs rescued England and ensured that the visitors finish on a high note after Jones and Knight fell in a span of seven deliveries.

Both Wilson and Beaumont struck a four and a six each as the former scored 29 off 24 while the latter made 23 runs at a strike rate of 143.75.

For Pakistan, pacer Diana Baig was the stand out bowler with two wickets for 28 runs in four overs.

Pakistan openers couldn’t provide their side a desired start as Ayesha Zafar (nine of eight) and Nahida Khan (eight of 19) were back in the pavilion in 4.4 overs with 29 runs on the scoreboard.

Javeria Khan, batting at three, recorded her eighth half-century in the format with an unbeaten 57. The right-handed batter struck five fours and a six in the 56 balls that she faced.

She did not get the desired support from the other end as Pakistan kept losing wickets on regular intervals. The next best score came from wicketkeeper-batter Sidra Nawaz, who made 19 not out from seven balls.

Javeria Khan said: “This innings was due on me as I was not able to put up scores earlier in the series. I look forward to execute what I have learnt from this series against a quality side like England and implement it in the T20 World Cup. Unlike this series, I am hopeful that I will be scoring runs from the first match in that tournament.

“We gave England tough times in bits and pieces and our overall performances has improved a great deal, which is something the England players also told us.

“We have squandered opportunities in this series. Going forward we should look to make the most of the chances we get in the match. This series will help us a lot in learning that.”

Pakistan managed 144 for five in 20 overs. Leg-spinner Sarah Glenn and medium-pacer Anya Shurbsole picked up two wickets each for 12 and 15 runs.

For registering two back-to-back half-centuries in the first two T20Is, England wicketkeeper-batter Jones was named player of the series.

Gautam Gambhir to retire from cricket