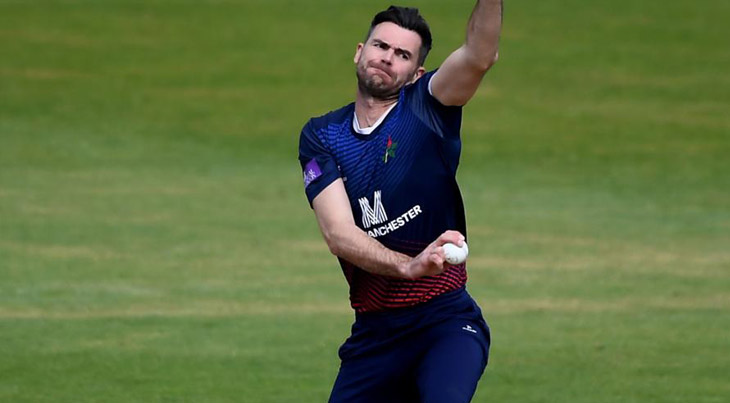 London: England spearhead James Anderson could be in for a “painful few days” according to Lancashire coach Glen Chapple after suffering a knee injury while on county duty.

Anderson, England’s all-time leading Test wicket-taker, was hit on the inside of his knee by a drive from James Fuller during Lancashire’s four-wicket defeat by champions Hampshire in a One-Day Cup semi-final on Sunday.

The 36-year-old Anderson left the field at Southampton and will now require further medical assessment on Monday.

“It is a nasty blow in a painful area,” said Chapple. “We don’t know but we think that it will be a nasty bruise that will settle down in the next few days.

“The physio will see him in the morning and he walked off there.”

Chapple, himself a former Lancashire paceman, added: “It is a difficult area. As soon as there is any swelling in there it will restrict your movement and limit your strength. I imagine it will be painful for a few days.”

Anderson’s tally of 575 Test wickets is the most by any fast bowler in history, with only the spin trio of Muttiah Muralitharan (800), Shane Warne (708) and Anil Kumble (619) ahead of him.

As Anderson no longer plays one-day international cricket this injury will have no bearing on tournament hosts England’s squad for the upcoming 50-over World Cup.

And there ought to be plenty of time for Anderson to recover before England’s bid to regain the Ashes starts with the first Test against Australia at Edgbaston commencing on August 1.

The England cornerstone broke Australia great Glenn McGrath’s record of 563 Test wickets, the previous best by a fast bowler, when he sealed a 118-run win over India at The Oval in September — a victory that completed a 4-1 series win.

Outcomes from ICC Board meeting in Cape Town

Tamim Iqbal out of Asia Cup after injury heroics