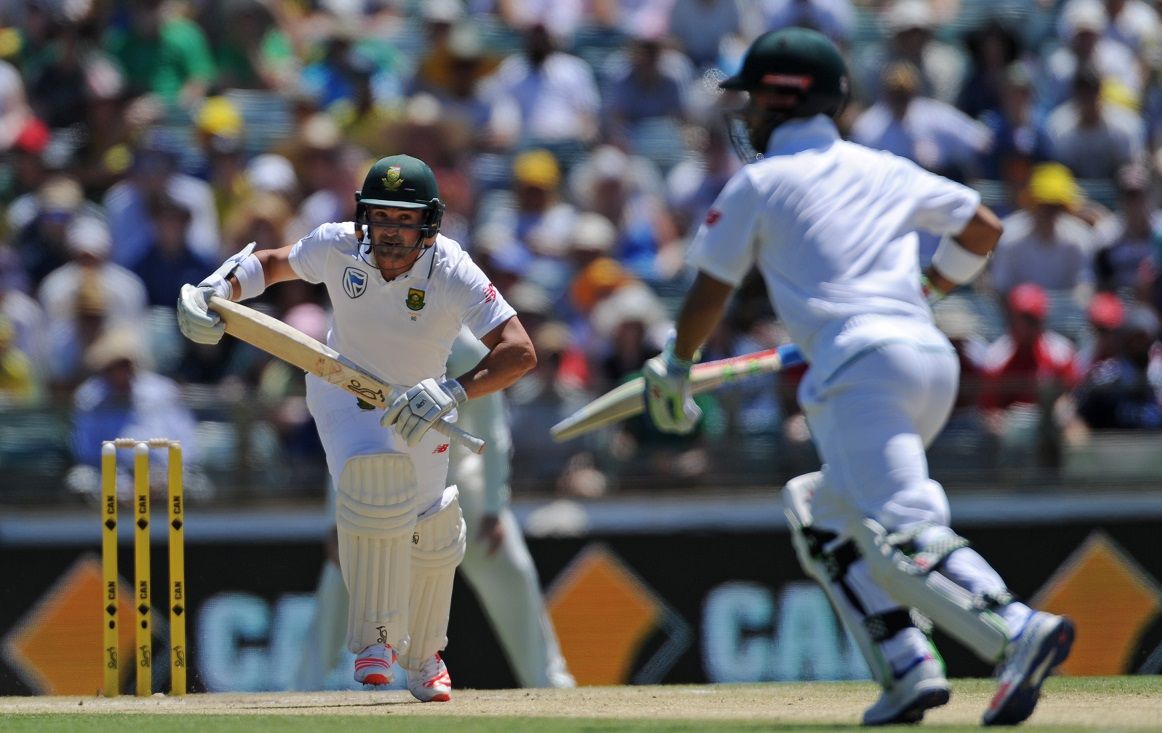 Perth: Centuries to Dean Elgar and JP Duminy guided South Africa into a commanding position on the third day of the opening Test against Australia in Perth Saturday.

At stumps on the third day the visitors were 390 for six in their second innings, an overall lead of 388 with four wickets in hand although the injured Dale Steyn is not expected to bat.

Vernon Philander was on 23 and a subdued Quinton de Kock was 16, the latter having been given a life on one when Adam Voges grassed a tough chance from the bowling of Mitchell Starc.

Duminy, who made 141, said he and Elgar initially set themselves to simply occupy time at the crease and added that the visitors would again look to keep Australia in the field for as long as possible on day four.

He suggested an Australian run chase would be complicated by the fact the pitch was starting to become more difficult to bat on.

“There is still a lot of work to be done in this Test match and we won’t have Dale Steyn in the fourth innings,” he said.

“The pitch deterioration, the cracks have definitely opened up a bit more and can play in favour.

“We have to put the ball in the right areas, but we saw in the last hour how much the ball did.”

Australian captain Stephen Smith was satisfied with the application of his bowlers on day three, but conceded his side was paying for its batting frailties 24 hours earlier.

However, he believed his side could chase down a large total.

“We let ourselves down yesterday, to get only two runs in front was not good enough, the batters didn’t do the job,” he said.

“But there is no reason why we can’t chase a total down.

The day belonged to Duminy and Elgar, who came together when the Proteas lost two early second innings wickets late on the second day.

The pair put on 250 for the third wicket as they repelled the Australian attack for most of the day.

Both batsmen made their Test debuts at the WACA Ground and the pair each notched their fifth Test centuries between lunch and tea.

Duminy eventually fell to end the partnership, chasing a wide ball from Peter Siddle (2-47) and getting a fine edge, being given out on a decision review after umpire Aleem Dar had turned down the Australian appeal.

The left-hander had faced 225 balls, hitting 20 fours and one six.

Elgar’s 127 buried the memories of his horror Test debut in Perth, when he faced just 22 balls and was dismissed for a pair on debut in 2012.

The opener faced 316 balls and batted for 471 minutes, eventually falling to a tired attempt to drive against Josh Hazlewood (2-97), slicing a catch to Starc in gully.

Duminy and Elgar had few problems with an Australian attack which appeared to wilt in the heat, with first innings destroyer Starc struggling with his control and looking little like the player who claimed four wickets on the opening day.

Starc, in his first Test since a nasty leg injury and coming off a limited preparation, bowled a host of wayward deliveries and grew increasingly frustrated as the day wore on.

His woes were compounded when he misjudged a high ball at mid-on when Elgar was 81 and failed to get a hand to the difficult chance.

The South Africans will be one bowler down in the Australian second innings, with champion quick Steyn expected to be out for at least six months due to a shoulder problem which is likely to require surgery.

Australia will have to produce its greatest ever fourth innings run chase at the ground to win the match, but the home team will take heart from the 2008 Test between the two sides, when South Africa chased down 414 on the final day.

That South Africa could be in such a strong position was remarkable given they appeared to be all but out of the match a day earlier.

After winning the toss and being dismissed for 242, the South Africans appeared certain to be facing a massive first innings deficit when Australia cruised to 158 for none before lunch on day two, but the home side then collapsed in stunning fashion to make just 244 as the match turned on its head.

Windies and England third ODI abandoned due to rain