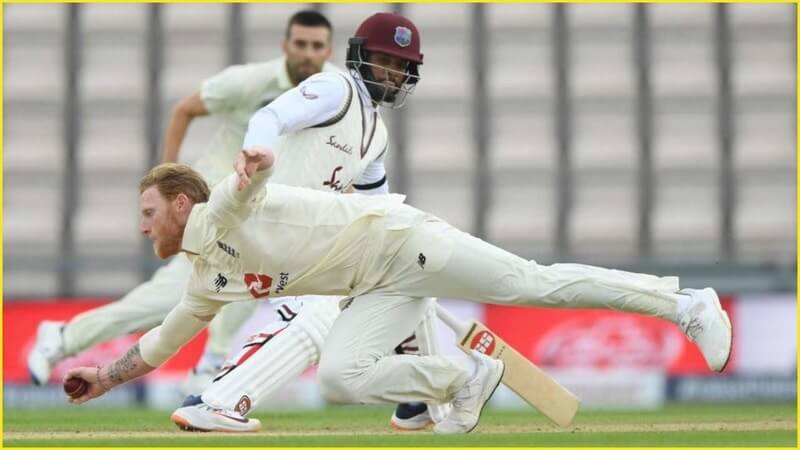 Southampton: West Indies batsmen Kraigg Brathwaite and Shane Dowrich ensured that their team took a first-innings lead of over a hundred runs against England on the third day of the first Test at Southampton on Friday.

Dowrich made 61 after opener Brathwaite had top-scored with 65 in a total of 318 all out.

But that still left West Indies 114 runs ahead in a match that marks international cricket’s return from lockdown.

Stokes’ haul included the wicket of West Indies captain Jason Holder for just five, with the England talisman having fallen to his rival all-rounder during the towering paceman’s Test-best 6-42 on Thursday.

The wicket of Alzarri Joseph was also his 150th in Tests.

Dowrich showed grit and determination to score a fifty. He held firm for 115 balls until he was caught down the legside by opposing gloveman Jos Buttler off Stokes.

For most part of the day, it was a struggle for England bowlers, and missed the presence of veteran paceman Stuart Broad.

Bowlers like Archer and Wood struggled to make an impression on a placid pitch.

They took just one wicket between them in a combined 44 overs — and that was only when Wood bowled last man Shannon Gabriel to end the innings.

Earlier in the day, Windies had resumed at 57-1. Soon after the play started, Shai Hope perished to Dom Bess, when he edged one to the slips.

Shamarh Brooks made a promising 39 before he was caught behind off James Anderson, with England’s all-time leading Test wicket-taker returning innings figures of 3-62.

Jermaine Blackwood gave his wicket away by driving Bess (2-51) straight to Anderson at mid-off.

Dowrich, however, drove Bess for two fours in three balls before, on 25, he hammered a drive the Somerset bowler could only parry.

Holder couldn’t do much with the bat and fell in single figures when, undone by a surprise bouncer, he hooked Stokes straight to Archer at long leg.

At the end of the day, England finished with 15/0, 99 runs behind the West Indies.