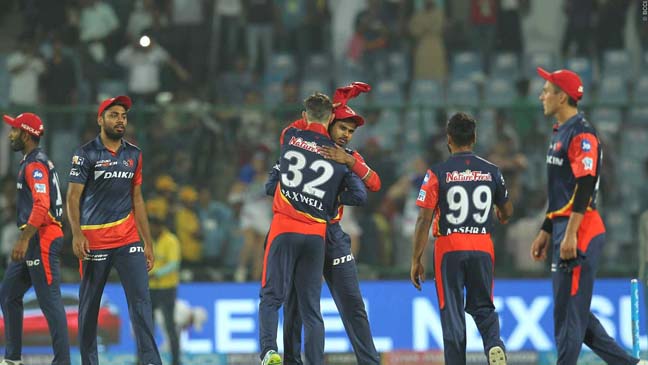 The Delhi Daredevils unleashed a leather hunt at the Feroz Shah Kotla ground in Delhi, posted the highest total of VIVO IPL 2018 and then restricted the visitors Kolkata Knight Riders to 164-9 in their run-chase. Result: Delhi Daredevils won by 55 runs. Outcome: DD ended their three-match losing streak and lifted off from the floor of the eight-team standings.

The Daredevils had hit the reset heading into this match; Gautam Gambhir had relinquished captaincy and Shreyas Iyer was handed the reins of the team. The team made the perfect beginning in their bid to turn things around as the new opening pair of Prithvi Shaw and Colin Munro added 59 runs before they were separated. Captain Shreyas then joined the teenager Shaw and the second wicket pair added 68 runs in seven overs – with runs flowing from both ends. After young Shaw was dismissed, Shreyas carried on and batted to the end; in all, the DD captain plundered 3 fours and 10 sixes, and finished unbeaten on 93 from 40 balls.

The Daredevils innings had the perfect finish as Shreyas hit four sixes and a four in the final over and 29 runs were added to the total. DD finished at 219-4; they had scored 57 in the first six overs, added 83-3 in the middle nine overs, and added a further 79-1 in the last five overs.

Faced with a demanding asking rate of 11, the Knight Riders had to go hard at the bowling from the get-go. However, that approach didn’t yield as they lost their top four batsmen within the sixth over. Andre Russell played a lone hand and tried to salvage the cause for his team, but even his 44 from 30 couldn’t take them close. The only noteworthy partnership in the KKR run-case was the 64-run stand between Shubman Gill (37 from 29 balls) and Russell. KKR, recovered from 46-4, to finish at 164-9.

Shreyas Iyer couldn’t have asked for a better first day in the office as captain of DD. After coming in to bat at number three, the 23-year old started slowly, scoring 7 runs off the first 9 balls he faced. He then switched gears, and dealt mainly in the currency of sixes; he hit ten of them in his 40-ball outing. Shreyas got to his half-century off 29 balls – reaching the milestone with a six off Shivam Mavi, and thereafter added 42 more runs off the next 11 balls he faced. He was dropped twice en route; when on 45, Robin Uthappa put down a catch at the edge of the long-on boundary, and five balls later Nitish Rana grassed an opportunity at the same position.

Shreyas’ main scoring zone was down the ground; all his ten sixes were in the arc between extra cover and wide long-on. He did not hesitate to muscle the ball when there was width on offer, and when the bowlers landed it a little straighter and closer to him, he got his left leg out of the way, created room for bat swing and gave the ball a proper pounding.

Still just 18 years old and playing only his second T20 match, Prithvi Shaw lit up the Kotla with a batting exhibition of the highest class. The DD opener hit seven boundaries and two sixes in his 44-ball inning; he drove with panache – through cover and down the ground, and his treatment of Mitchell Johnson was a battle not to be missed. Young Prithvi scored 24 runs from 12 balls off the Aussie pacer, which included two boundaries and two sixes – one six coming through a sweetly timed pull shot to a ball that sat up and the other a whip off a full length ball on the pads. Among the several delightful strokes Shaw played, here are a few that stood out: the backfoot square drive off Shivam Mavi, a straight drive off Andre Russell and the whip (helicopter-like-shot) off Johnson.

It was the returning Colin Munro (33 from 18 balls) who set the tone for the Daredevils innings. The Kiwi batsman, who had been benched after scores of 4 & 0, announced his aggressive intent when he latched onto a short delivery from Kuldeep Yadav and deposited it into the stands in the second over. In the third over, he collected consecutive boundaries off Piyush Chawla. In the fourth, he drove one past Shivam Mavi. In the following over, he drove Sunil Narine through cover and then deposited one deep into the stands at midwicket. By the time six overs had been bowled, Munro had raced to 32 off 15 balls; he was dismissed off the final ball of the seventh over – castled by Mavi.

Amit Mishra was the most impressive bowler in the match. The veteran leg-spinner bowled three spells, did not give any pace on the ball and bowled smartly – often bowling full and wide outside the off-stump. His returns for the day were 4-1-23-2 – an economy rate of 5.75.

The Daredevils pacer Avesh Khan (2-29) bowled impressively too; after two excellent overs in the powerplay – during which he collected the wicket of Nitish Rana – the young man came back and bowled a fine 18th over in which he outsmarted Andre Russell repeatedly, eventually dismissing the batsman with the perfect middle stump yorker bowled from round the stumps.

Stat of the Match

At the age of 18 years & 169 days, Prithvi Shaw became the joint youngest to score a half-century in the IPL. Earlier, in 2013, the Rajasthan Royals’ Sanju Samson was the same age when he scored a half-century against RCB.

29 runs were added to the Delhi Daredevils total in the final over – that would be the most expensive over of VIVO IPL 2018.