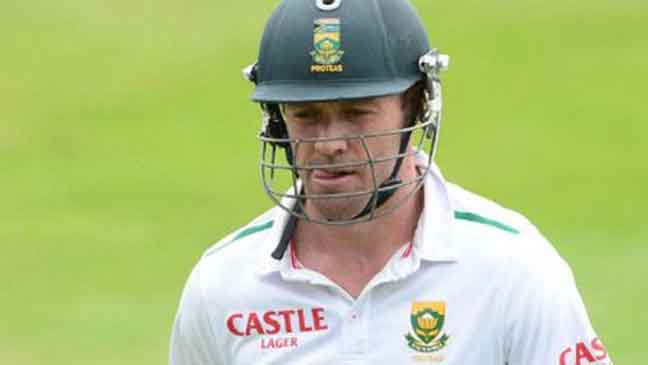 De Villiers, 34, won fans around the world for mixing traditional and unorthodox shots, as well as his fast scoring and ability to hit the ball to all parts of the ground.

He holds the world record for the fastest half-century (16 balls), hundred (31 balls) and 150 (64 balls) in ODIs, and is one of the few batsmen to top the Test and 50-over rankings at the same time.

“I have decided to retire from all international cricket with immediate effect,” he said in a statement.

The middle-order batsman — popularly known simply as “AB” — said it had taken him a long time to make the “tough” decision and that he decided to quit while still playing “decent cricket”.

“It would not be right for me to pick and choose where, when and in what format I play for the Proteas. For me, in the green and gold, it must be everything or nothing,” he said.

De Villiers added he had no plans to play overseas but would continue in league competitions, saying: “It’s not about earning more somewhere else, it’s about running out of gas.”

“He has had a wonderful career, done freakish things in the game across three formats and he has been a great servant to South Africa,” Root said speaking in London.

In limited overs, he finished as the number-two ranked batsman in the world and as the second highest run-scorer behind Jacques Kallis with 9,577 runs at an average of 53.50.

“Time and time again he has left cricket fans around the world marvelling at his feats with the bat and in the field.”

Among his many records, “AB” was the only wicketkeeper to score a century and make at least 10 dismissals in the same Test, against Pakistan at Johannesburg in 2013.

De Villiers was known as “Mr. 360” for his round-the-ground shots, and Indian legend Sachin Tendulkar wished him well on Twitter saying: “Like your on-field game, may you have 360-degree success off the field”.

Fellow former Indian batsman described him as “the most loved cricketer in the world” and congratulated him “on a wonderful career”.

“AB has been a colossus on the world stage for well over a decade,” he said.

Ali aims for ‘fresh start’ after another star turn at Southampton