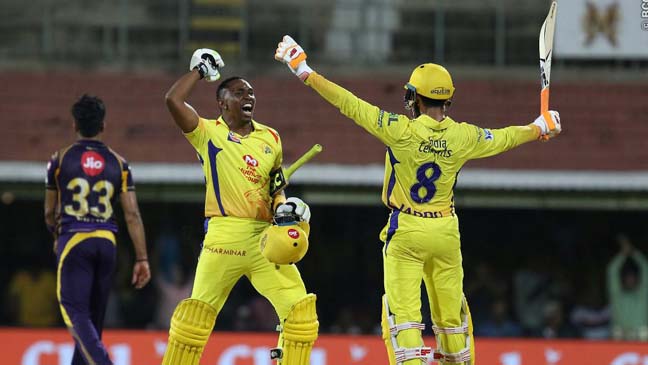 For the second time in two matches this season, Chennai Super Kings snatched victory from the jaws of defeat. If Dwayne Bravo bailed them out in the season opener against the Mumbai Indians, on Tuesday night it was Sam Billings, who was playing his first IPL match for the franchise. After being blown away by Andre Russell in the first half of the match, CSK, courtesy Billings’ 21-ball half-century, chased down 203 to win by 5 wickets, with one ball to spare.
The match was in the balance at the start of the last over too, with CSK needing 17 runs. But Vinay Kumar’s first ball of the final over was a full toss (also called a No Ball for being above the waist), which was duly deposited into the stands by Dwayne Bravo. The second and third deliveries produced three runs, after which the bowler conceded an extra run through a wide.

Two singles later, the equation was reduced to 4 runs off the final two balls. Ravindra Jadeja deposited the fifth ball into the stands at long-on to spark off celebrations at the MA Chidambaram Stadium. It was the perfect homecoming for CSK.

When Suresh Raina was dismissed in the twelfth over, CSK still needed 102 from 51 balls. With MS Dhoni struggling to hit his straps, KKR were in control of proceedings. Then came the innings that turned the match in CSK’s favour and gave them a chance: that of Sam Billings. The Englishman took his time to get a hang of the conditions, but grew in confidence with every passing delivery, and played some astonishing strokes. In the fifteenth over, he hit compatriot Tom Curran for two sixes. After a brief period of calm, he picked Andre Russell and hit him for consecutive sixes; first, he got low and scooped the ball over the fine-leg boundary, and next ball stood tall in his crease, weight on the backfoot, and on-drove the ball for a spectacular six. He got to his half-century at the start of the 19th over and collected another six two balls later – staying low and depositing the ball over the square-leg boundary with a pull shot.
Billings was dismissed off the fourth ball of the penultimate over, but his 56 off 23 balls brought CSK within striking distance.

Earlier, one innings stood out in the KKR innings – that of Andre Russell. The big Jamaican walked in to bat after ten overs – by which time KKR were reduced to 89-5. He began slowly, scoring 10 off the first 11 balls he faced, but then switched gears at an instant. He was cautious against Imran Tahir, but swatted length deliveries off the seamers, and hit effortless sixes. One of his 11 sixes in this match was measured as the longest six hit in this season’s IPL.

Russell did to Dwayne Bravo what Bravo had done to the Mumbai Indian bowlers in the season opener; he scored 41 runs off 14 balls off him, and hit him for 6 sixes – including on one occasion a hat-trick of sixes. Shardul Thakur received tap too, conceding 27 runs off the 7 balls he bowled to Russell.

KKR had three useful contributions in their innings. Chris Lynn made a breezy 22; the Australian struck four boundaries in his 16-ball knock which ended when he was castled by Ravindra Jadeja in the sixth over. Robin Uthappa was hitting the ball well and struck 2 fours and 3 sixes in his 16-ball 29 which ended when he was involved in a mix-up in running. Karthik, who was involved in a 76-run stand with Russell, made 26 from 25 balls.

For Chennai Super Kings, the platform for the chase was laid by the openers Shane Watson and Ambati Rayudu. Watson was the first to launch, and not too long after Rayudu joined in; if Watson took toll of the KKR quicks, Rayudu got stuck into Piyush Chawla. The pair hit six boundaries and five sixes, and stitched together a partnership of 75 runs before Watson (42 from 19 balls) was dismissed just prior to the field restrictions being relaxed. Rayudu (39 from 26 balls) fell victim to Kuldeep Yadav in the ninth over.

As was expected prior to the match, spin bowlers emerged the best bowlers in the match. Watson returned CSK’s most successful bowler with figures of 2-39, but Harbhajan Singh (2-0-11-1) and Imran Tahir (4-0-26-0) were the team’s most economical bowlers.

For KKR, Sunil Narine was top-notch; on a day when batsmen made merry and a total of 407 runs were scored in 39.5 overs, the Trinidadian returned extraordinary figures of 4-0-17-1 – being the only bowler from both teams to not concede a boundary.

Andre Russell hit Dwayne Bravo for six sixes in his innings; that was only the second time that a batsman had hit one particular bowler for six sixes in an innings in the IPL. The only other batsman to achieve the feat was Virat Kohli against KC Cariappa.

Kohli taking nothing for granted against Australia

England roar back in Ashes thriller