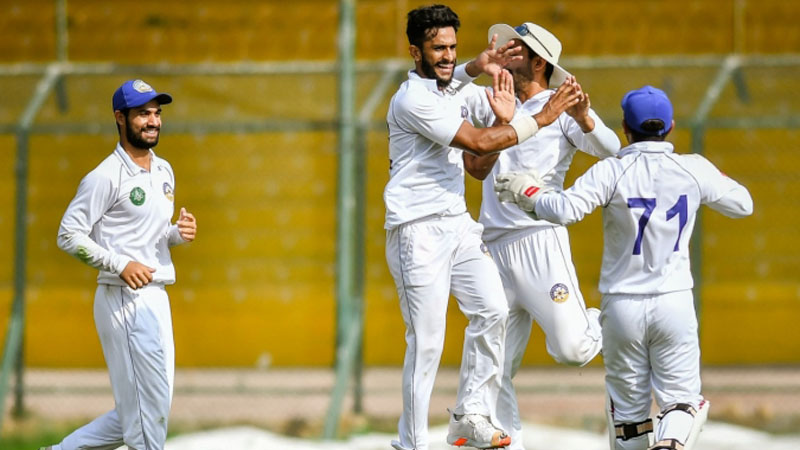 Karachi: On the last day of the sixth round of the premier first-class tournament Quaid-e-Azam trophy, all three matches saw results as Central Punjab, Khyber Pakhtunkhwa, and Northern registered victories against Sindh, Balochistan, and Southern Punjab respectively.

In the the televised match at the National Stadium, defending champions, Central Punjab registered a massive 227-run triumph against Sindh to open their account in the tournament.

Sindh started the fourth day with 152-4, chasing the daunting target of 432 runs and got bundled out for 204 runs. Shehzar Mohammad and Saad Ali were prominent with 50 and 31 runs respectively. For Central Punjab, captain Hasan Ali bagged four, Waqas Maqsood got three wickets.

After 276 by CP in the first innings, Sindh fell for just 96. Central Punjab scored 247 in the second innings.

At the State Bank of Pakistan stadium, Khyber Pakhtunkhwa clinched victory against Balochistan by a handsome margin of 175 runs.

Khyber Pakhtunkhwa were bowled out for 199 in the second innings after resuming the third day on 98-3. In the first innings KP rounded up 320 runs courtesy of 153 runs by Kamran Ghulam & a 58 by Rehan Afridi. Balochistan, in their first innings, were bowled out for just 120 in 33 overs. In the second innings Balochistan could score 224 before getting all-out.

At the UBL Sports Complex, Northern began their 200-run chase, against Southern Punjab, on the final day on Saturday, and overhauled the target in 41.5 overs for the loss of four wickets. Nasir Nawaz (68), Umer Amin (65*) & Hammad Azam (53*) were the prominent scorers.

Umer Amin stroked 153 in the first innings while Northern’s captain Nauman Ali bagged six wickets to ensure his side had a reasonable figure to hunt in the second innings.

Southern Punjab scored 285 in the first innings and accumulated 295 in the second innings. Northern, in their first innings, amassed 381 runs.