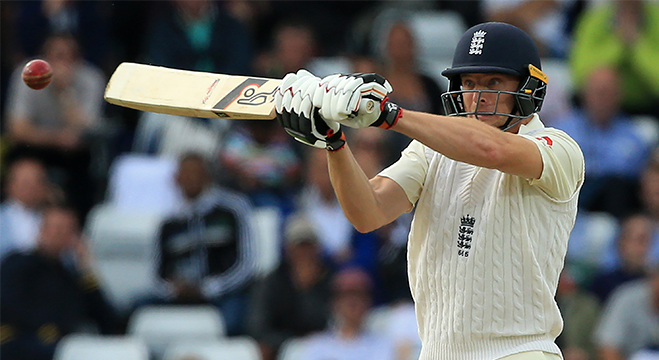 Buttler’s crude bat message could land him in trouble

Leeds: England’s Jos Buttler is running the risk of action by world cricket’s governing body as a result of the crude words he writes on the top of every one of his bat handles.

Buttler produced a man-of-the-match innings of 80 not out as England beat Pakistan by an innings and 55 runs inside three days at Headingley on Sunday to win the second Test and so end the two-match series all-square at 1-1.

But during a break in play, television cameras highlighted the words “Fuck it” written on the top of his bat handle.

For Buttler, it is a way of reminding himself not to get too wrapped up in the pressure of top-level sport.

But the International Cricket Council may take a different view.

The ICC’s clothing and equipment rules and regulations state: “Players and team officials shall not be permitted to wear, display or otherwise convey messages through arm bands or other items affixed to clothing or equipment unless approved in advance by both the player or team official’s board and the ICC Cricket Operations Department… the ICC shall have the final say in determining whether any such message is approved.”

It’s hard to believe the ICC granted prior approval for the words on Buttler’s bat and there is precedent for them taking action against players in similar circumstances.

Whether they do so now will depend on whether the umpires decide to charge Buttler and, in turn, how match referee Jeff Crowe responds.

Buttler, explaining why he marks the top of all his bats in this way, said: “I think it’s just something that reminds me of what my best mindset is — when I’m playing cricket, and probably in life as well.

“It puts cricket in perspective. When you ‘nick off’, does it really matter?”

The 27-year-old added: “It’s just a good reminder when I’m in the middle, when I’m questioning myself, and it brings me back to a good place.”

Buttler was recalled for the Pakistan series after 18 months out of the Test side by England’s new national selector, Ed Smith.

Smith justified his decision on the basis of Buttler’s form in the Twenty20 Indian Premier League, where he cemented his reputation as one of the world’s leading white-ball batsmen.

Buttler responded to Smith’s backing with two fifties in as many Tests albeit the first was in a nine-wicket defeat by Pakistan at Lord’s.

And after 20 matches in an up-and-down Test career, Buttler believes he is now learning to trust his instincts rather than worry about how others think he should play — a message reinforced by the coarse words on his bat handle.

“If anything my mentality has been quite similar to my first few Tests — not worrying about external factors, just trying to play the game, trusting myself,” he said.

“The big difference is experience.

“I used to think you could either do it or you can’t.

“But now I understand how valuable experience is, and maturity, to help you to deal with not only the on-field stuff but what goes on around it.”

Buttler made 85 on Test debut against India at Southampton in 2014 and featured in the following year’s home Ashes series win.

But from then on he struggled at Test-level.

“I started to think too much about how to not get out, as opposed to how to score runs,” Buttler explained.

“I learnt some really valuable stuff there, and got in a really bad rut that I just couldn’t get out of. The only real way to get out of it was to be dropped.

“Actually, being dropped released a lot of pressure,” he added.

Bisht comes up big to see India past Pakistan