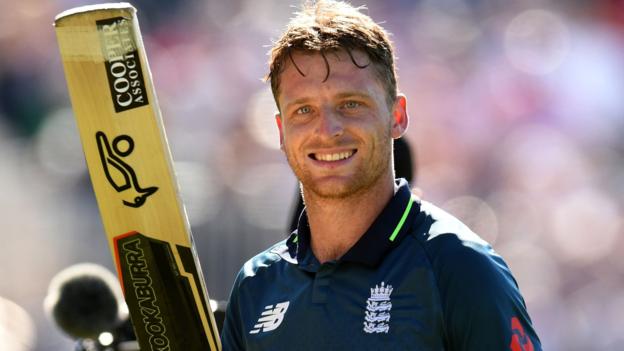 Birmingham: Jos Buttler will be promoted to open the innings in England’s lone Twenty20 international against Australia at Edgbaston on Wednesday, team management have confirmed.

Buttler was one of the stars of this season’s Twenty20 Indian Premier League after being promoted to open and scored a tournament record-equalling five successive fifties for the Rajasthan Royals.

He has opened once before for England in his 61 T20 internationals, making an unbeaten 73 off 49 balls – his highest T20 score for England — when Sri Lanka were beaten by eight wickets at Southampton in 2016.

Buttler has usually been deployed as a middle-order batsman by England but, having been recalled to the Test side earlier this season, they are now determined to cash in on his recent brilliant form in white-ball cricket.

The wicketkeeper-batsman was named man-of-the-series after England’s 5-0 rout of world champions Australia, with his brilliant 110 not out sealing a dramatic one-wicket win in the fifth one-day international at Old Trafford on Sunday.

That century crowned a brilliant series where Buttler scored 275 runs in total, including scores of 91 not out and 54 not out, at an extraordinary average of 137.50.

Paul Farbrace, deputising as head coach in place of Trevor Bayliss for this one-off match and next month’s three T20s against India, confirmed the 27-year-old Buttler’s promotion by telling reporters at Edgbaston on Tuesday: “He will open tomorrow (Wednesday).

“In 120 balls in an innings, you want to get your best strikers facing as many balls as possible. The form he’s in, the way he’s playing, it makes sense to get him at the top of the order.”

Farbrace added: “He’s using the experience he’s gained to make himself more consistent, whatever colour the ball, whatever form of the game.

“On Sunday, I thought that was as good an innings as I’ve seen him play for England — probably on a par with the hundred he got in Dubai against Pakistan.

“One was exciting shots and just pure skill, and the other day he showed how much he’s learnt, how much calmer he is at the crease.”

Farbrace is already the assistant coach of the England side.

His brief spell in charge has been seen as a possible audition for the full-time job when Australian coach Bayliss makes good on his long-announced plan to stand down after next year’s World Cup and Ashes, both of which will be in England.

Asked if he could succeed Bayliss, Farbrace replied: “Who knows?

“Even if I was lucky enough to be considered come next September, then that would be a great position to be in.”

The 50-year-old former Kent and Middlesex wicket-keeper added: “I count myself very fortunate even to be in this position, as an assistant coach to the England team.

“I wasn’t good enough to get anywhere near it as a player, so to be involved as a coach is fantastic.”

Morgan urges Stokes to ‘be himself’ as Samuels clash looms