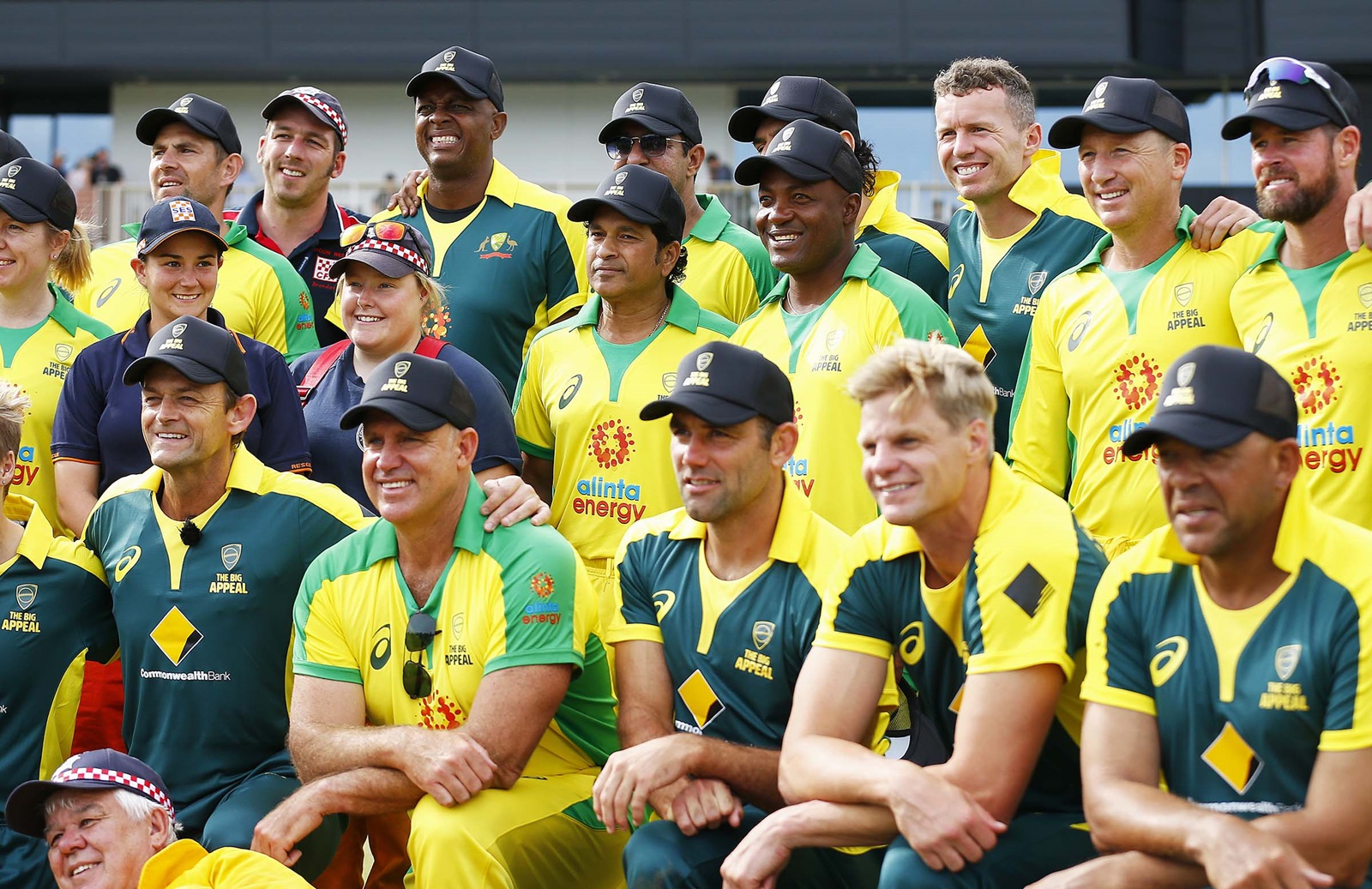 The legends turned it on, the fans came in droves, and the Bushfire Cricket Bash achieved its chief purpose – raising more than $7.7m for the communities devastated by the fires that have ravaged Australia for months.

On Sunday afternoon at Melbourne’s Junction Oval, cricket royalty – and a smattering of footy legends – came together for a cause that has united the country across the summer, while also touching every corner of the cricket globe.

That was evident in the presence of Sachin Tendulkar, Brian Lara, Courtney Walsh, Yuvraj Singh and Wasim Akram. Greats of the game, all of them, and they delivered, too.

In the end, it was the Ricky Ponting XI that got it done, their 5-104 enough in the 10-over contest by, conveniently, one run.

Lara was made to retire at 30 after lacing a series of lofted cover drives and straight drives that echoed his peak genius.

Then Ponting hit an entertaining 26 from 14 balls before retiring himself.

Young NSW star Phoebe Litchfield batted with both legends – a barely-believable thrill for the 16-year-old from Orange, who smoked a couple of cover drives that almost rivalled Lara’s.

In between innings, Tendulkar faced an over from Ellyse Perry and Annabel Sutherland (three balls apiece). The Little Master gracefully flicked his first ball through fine leg for four. Yep, he’s still got it as well.

Then the run chase began. Shane Watson bullied Wasim and co with a spectacular 30 from nine balls.

Gilchrist hit his first ball for six – standard for the three-time World Cup winner – before being knocked over by Aussie Rules great Luke Hodge.

Then Andrew Symonds clubbed a few sixes over long-off as his son watched on from the dugout.

Wasim came back, and knocked over NRL great Cam Smith with an absolute peach. It was first ball though so Smith survived, he and AFL champ Nick Riewoldt tasked with finding the necessary runs in the final over from Dan Christian.

A no-ball and a boundary left Riewoldt with the chance to win it from the final ball… he swung hard, but he found Litchfield at long-on, and after some madness between the wickets, the Ponting XI held on by a single.

More importantly, almost eight million dollars were raised, and with more auctions taking place, the money for the fire-affected communities will continue to pour in.

Mid-match, it was announced that the country’s professional players – through the ACA – had pledged $2m to through the Grassroots Cricket Fund to support clubs impacted by bushfire emergency.

Arena56: A World Class Recreational Facility in the heart of Lahore