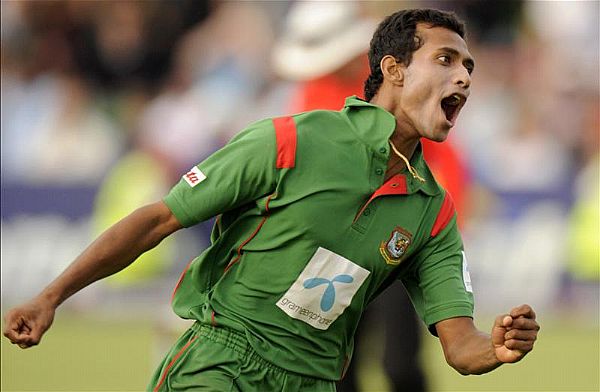 Dhaka: Bangladesh’s injury-plagued squad suffered a fresh blow ahead of their forthcoming New Zealand tour after fast bowler Shafiul Islam was ruled out with a hamstring injury, an official said Thursday.

“Shafiul hurt his left hamstring during a recent Bangladesh Premier League match, which would sideline him for at least three weeks,” said chief selector Minhajul Abedin.

Kamrul Islam was included in the team as a replacement for the tour, where Bangladesh are due to play three one-day internationals, three Twenty20 internationals and two Tests from December 26 to January 24.

Shafiul’s injury came as a blow considering his form in the Bangladesh Premier League (BPL), the Twenty-20 tournament, where he had taken 18 wickets in 13 matches.

Earlier, another in-form pacer Mohammad Shahid was ruled out of the tour with a knee injury and was replaced by Rubel Hossain.

There are also question marks over star pace bowler Mustafizur Rahman for the early part of the tour as he is still recovering from a shoulder surgery he suffered in England in August.

Mustafizur has been included in the 22-member squad, with the selectors hoping he will regain full fitness at some stage of the tour.

Bangladesh, who will hold a conditioning camp in Sydney before the tour, will leave home in two phases.

The first group of players will leave for Sydney later on Thursday while the second group, consisting mainly of squad members who will be involved in Friday’s BPL final, will leave Dhaka on December 10.

No bar on Kamran Akmal’s selection in Pakistan team