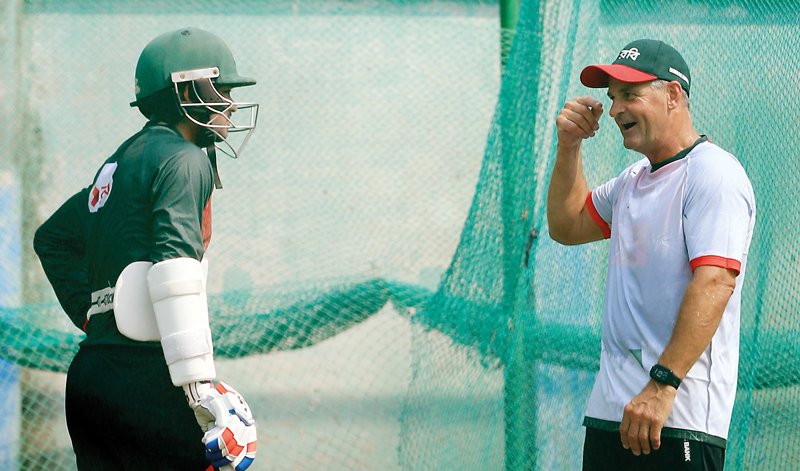 Sylhet: Bangladesh coach Steve Rhodes Sunday said was reluctant to consider his men favourites for the Twenty20 series against West Indies, despite a streak of hot form against the Caribbean visitors.

The three-match T20 contest gets underway Monday with Bangladesh riding high after beating the West Indies in the preceding Test and one-day international series on home soil.

The last time the two sides faced off in a T20 series was in the USA in July, when Bangladesh won 2-1.

But Rhodes urged his men against hubris, warning they would be coming up against a better-ranked side in the opener in Sylhet.

“But we are asking for more. We want the players to beat the West Indies in Twenty20. They’re ranked above us. They are world champions.

“We surprised them in Florida and surprised ourselves as well. But the plan is to go out there and win the series.

“We desperately want to do it and it’s going to be a lot tougher than the other two series because this is the format West Indies excel at.”

Bangladesh suffered an injury scare before the series even got underway, with skipper Shakib Al Hasan struck by a ball on his toe during Sunday’s training session.

Rhodes confirmed Shakib was unharmed and should lead Bangladesh into Monday’s match.

“He is fine… He is smiling and happy,” said Rhodes.

“He is icing his foot at the moment. I’d be very surprised if he wakes up tomorrow and there’s any issue, to be perfectly honest,” he said.

“The people back home deserve a Christmas gift. We hope to close out the year with a win,” he said.

“We still think T20 is our premier format. We obviously haven’t had the results in the recent past to be proud of. But here’s a chance to turn things around and end 2018 in a good way.”

The West Indies will wrap up their tour of Bangladesh with the final T20 matches of the series in Dhaka on December 20 and 22.

Don’t just stand there! Azhar expects teasing from son for bizarre run out