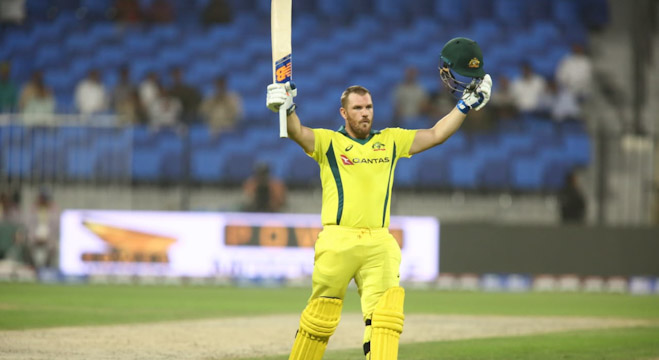 Sharjah: Aaron Finch smashed a second consecutive hundred while Usman Khawaja made 88 as the two guided Australia to a comprehensive eight-wicket victory over an inexperienced Pakistan in the second one-day international at the Sharjah Cricket Stadium on Sunday.

The two trumped Mohammad Rizwan’s maiden hundred — 115 off 126 balls with 11 boundaries — as Australia overhauled the 285-run target in 47.5 overs on a flat Sharjah Cricket Stadium pitch.

Finch finished with 143-ball 153 not out with six sixes and 11 boundaries — his highest ODI score —  while Khawaja’s 88 came off 109 balls with eight boundaries as the two laid the platform for Australia’s win with a solid 209-run opening-wicket stand which left Pakistan attack helpless.

When Khawaja holed out to Yasir Shah in the 37th over the writing was very much on the wall. Glenn Maxwell hit two sixes in his 19 before he ran himself out but Shaun Marsh accompanied Finch to the crossing line with a patient 11 and avoided any turn around in the final overs.

But credit to Pakistan’s inexperienced attack that they took the match to that length after a dominating opening stand.

The victory, in the 100th bilateral ODI match between the two teams, gives Australia a 2-0 lead in the five match series. They won the first match, also by eight wickets at the same venue.

Pakistan have rested six key players in the series in order to keep them fresh for the ICC Cricket World Cup 2019 starting in UK from May 30.

Abu Dhabi will host the third match on Wednesday followed by the last two in Dubai on Friday and Sunday.

Finch said he hung in to avoid any early risks.

“I just wanted to get through the initial overs and it worked,” said Finch, whose previous best of 148 was against Scotland at Edinburgh in 2013. “Usman is in great form and he made it easy for me. Disappointed that he did not get a hundred.”

“It’s the bowling where we lacked early wickets,” said Malik. “But we could still see a lot of positives as we have given chances to youngsters and they have shown talent, like Rizwan came good today.”

It was Rizwan who steadied the Pakistan’s innings after they decided to bat after winning the toss.

Rizwan, grabbing the wonderful opportunity in the absence of regular wicket-keeper batsman Sarfraz Ahmed, worked his way to a maiden hundred, adding an innings building 52-run stand with Haris Sohail (34) and then invaluable 127 for the fifth-wicket with Malik who scored 61-ball 60.

Australia’s fast improving fast bowler Jhye Richardson had jolted Pakistan in the first over of the match when he bowled opener Imam-ul-Haq through the gate for a duck. It became 2-35 when Richardson had Shan Masood caught for 19.

Masood was shaping well with four boundaries but failed to keep a flick down as the ball stopped on him.

But those two wickets were the last Richardson got from the match as he fell awkwardly while fielding in the deep and walked off the field with a seemingly dislocated shoulder. That leaves him doubtful for the remainder of the series.

Umar Akmal, recalled in the side after two years, did not match his 48 in the first match and was caught at deep mid-wicket off Nathan Lyon after scoring 16.

It was left to Rizwan and Malik to lift the total. Rizwan completed his fourth ODI half-century off 60 balls, sweeping the spinners to the best effect.

Malik was also not left behind, reaching his 44th half-century off 53 balls. Once Rizwan crossed his previous ODI best of 75 not out, scored against Zimbabwe at Harare in 2015, he grew in confidence. He completed his hundred off 114 balls with nine boundaries.

Malik departed in the 45th over, caught at long-on off leg-spinner Adam Zampa while Rizwan too holed out in the deep, trying to smash a six.

Imad Wasim chipped in with ten-ball 19 containing a six and two boundaries while Faheem Ashraf made run-a-ball 14 with a boundary and a six.

Richardson was the pick of Australian bowlers with 2-16 while pace partner Nathan Coulter-Nile grabbed 2-52. Finch, Zampa and Lyon took a wicket apiece.