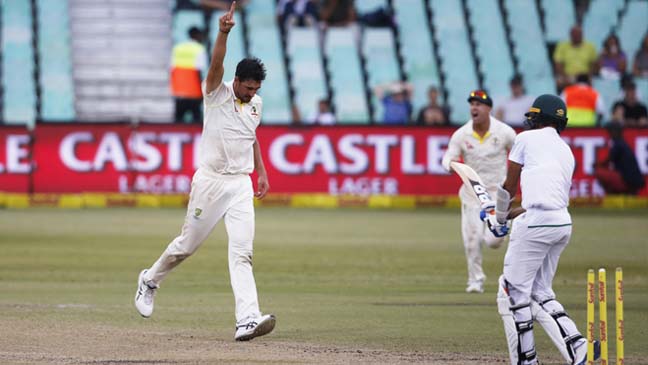 Durban: Australia wrapped up a 118-run win on the fifth day of the first Test against South Africa on Monday but the result is likely to be overshadowed by an ugly bust-up between David Warner and Quinton de Kock.

It took Australia 18 minutes and 22 balls to claim the last South African wicket when De Kock swung across the line and was leg before wicket to Josh Hazlewood for 83.

South Africa were bowled out for 298, adding five runs to their overnight total of 293 for nine

The win gave Australia a 1-0 lead in the four-match series.

Just before the rapid conclusion of the match, however, video footage emerged showing Aussie firebrand Warner pointing and directing a verbal barrage at De Kock during Sunday’s play at Kingsmead before he was restrained and pulled away by his teammates.

The incident reportedly took place as the players were returning to their dressing rooms at tea.

“CA is working to establish the facts of what has occurred and will not be commenting further until that has been done.”

The Australians had earlier been criticised for their ebullient celebration of the dramatic run-out of Proteas’ star batsman AB de Villiers.

De Villiers was run out for nought after being involved in a mix-up with opening batsman Aiden Markram, with Warner playing a key fielding role in securing the crucial wicket.

The vice-captain then led ecstatic celebrations with his teammates as Nathan Lyon, who had knocked off the bails, dropped the ball towards a sprawled De Villiers as he ran over to join them.

In a statement issued by Cricket South Africa on Monday, team manager Mohammed Moosajee said: “It’s rather unfortunate that the incident took place and certainly not in the spirit of the game.

“The match referee had spoken to us after the day’s play. We will await any further communication from the ICC around this incident.”

The Australians’ behaviour was slammed by former South African captain Graeme Smith, who told Cricket Australia’s cricket.com.au website in Durban that Lyon as an experienced cricketer would “probably say (his action) was unnecessary himself”.

“We’ve got used to Davey (Warner) over the years. I think the less interest you take in him the better,” Smith added.

The match was effectively won and lost in the first innings when Australia took a lead of 189 runs.

Half-centuries by Warner and skipper Steve Smith and 96 by Mitchell Marsh enabled Australia to make 351.

South Africa fought back in the second half of the match, bowling with more purpose to bowl out the tourists for 227, then recovering from a nightmare start to their second innings, largely through Markram, who made 143, and De Kock.

The batting of the lower order of the teams was a significant difference.

Australia’s last five wickets fell for a total of 166 runs overs the two innings, while South Africa could muster only 27 runs over the same period.

Starc had match figures of nine for 109 and was particularly effective against South Africa’s tailenders.