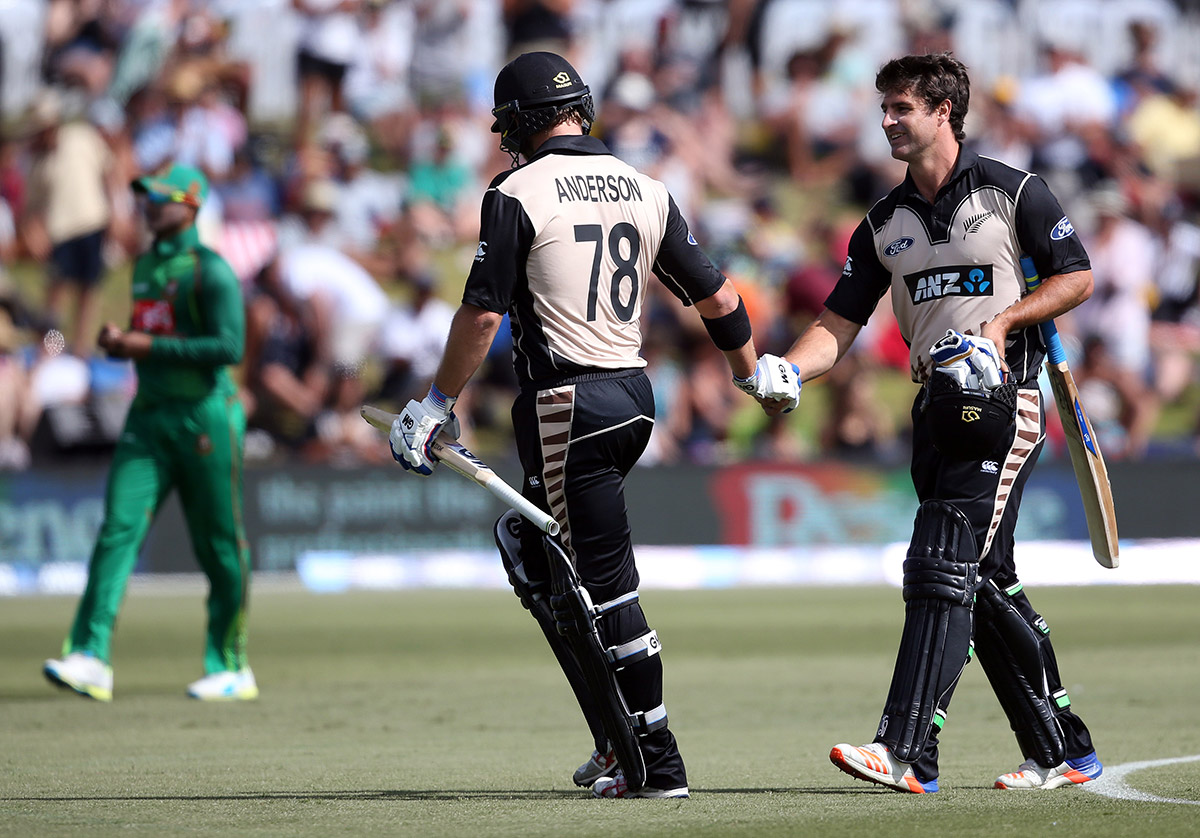 Mount Maunganui: Corey Anderson bludgeoned 94 off just 41 balls as New Zealand beat Bangladesh by 27 runs in the third Twenty20 at Bay Oval on Sunday to sweep the series.

Anderson, who put on 124 runs for the fourth wicket with Kane Williamson (60), hit a New Zealand record 10 sixes in his batting blitz as New Zealand posted 194 for four.

Bangladesh in reply made 167 for six in their 20 overs.

Tamim Iqbal and Soumya Sarkar launched Bangladesh’s reply by reaching 44 in the fifth over when Tamim was dismissed for 24.

Bangladesh were 89 for two after 10 overs, but with Soumya having fallen for 42, they could not sustain the run rate.

The tourists still had an outside chance of reaching their target at 120 for three after 14 overs when spinner Ish Sodhi produced a crucially tight over in which he took one for three, blowing out the required run rate to an improbable 14.44 per over.

New Zealand captain Williamson said the blustery conditions meant the win was not as easy as it appeared on the scoreboard.

“Corey’s knock was outstanding. It wasn’t easy at times — you had to adjust to the wind but I don’t think the wind mattered to Corey,” he said.

“He hit it to parts and hit it a long way and it was a good knock that set us up for victory.”

New Zealand, sent into bat, were on the back foot early, slumping from 34 for nought to 41 for three in the space of 11 deliveries.

That brought Anderson and Williamson together and after taking a few overs to settle in, with only 55 on the board at the halfway stage, they let fly in the second half of the innings which produced 139 runs.

They also set a New Zealand fourth-wicket partnership record of 124, one more than the previous mark set by Colin Munro and Tom Bruce in the second game two days ago.

The big-hitting Anderson only faced 41 deliveries for the highest knock of his career while Williamson faced 57 balls for his seventh Twenty20 half-century.

Bangladesh captain Mashrafe Mortaza, who had the misfortune to see Williamson dropped off his bowling on 53 and 58, was unable to complete his fourth over because of injury, compounding his team’s problems.

Regular opener Imrul Kayes was also injured in the field. He dropped down the order during the Bangladesh innings and was not required to bat.

Rubel Hossain was the pick of the Bangladesh bowlers with three for 31, including two wickets in one over when he removed Jimmy Neesham (15) and Munro, a century-maker two days ago, without scoring.

Sodhi took two for 22 and Trent Boult two for 48 for New Zealand.

The defeat left Bangladesh winless after three 50-over matches and three Twenty20s, with two Tests remaining on their tour.

Pakistan’s Hasan does not fear flat pitches at World Cup

‘Do it your way’, Hussain tells new captain Root

Imam and Khan propel Pakistan to crushing victory over Zimbabwe