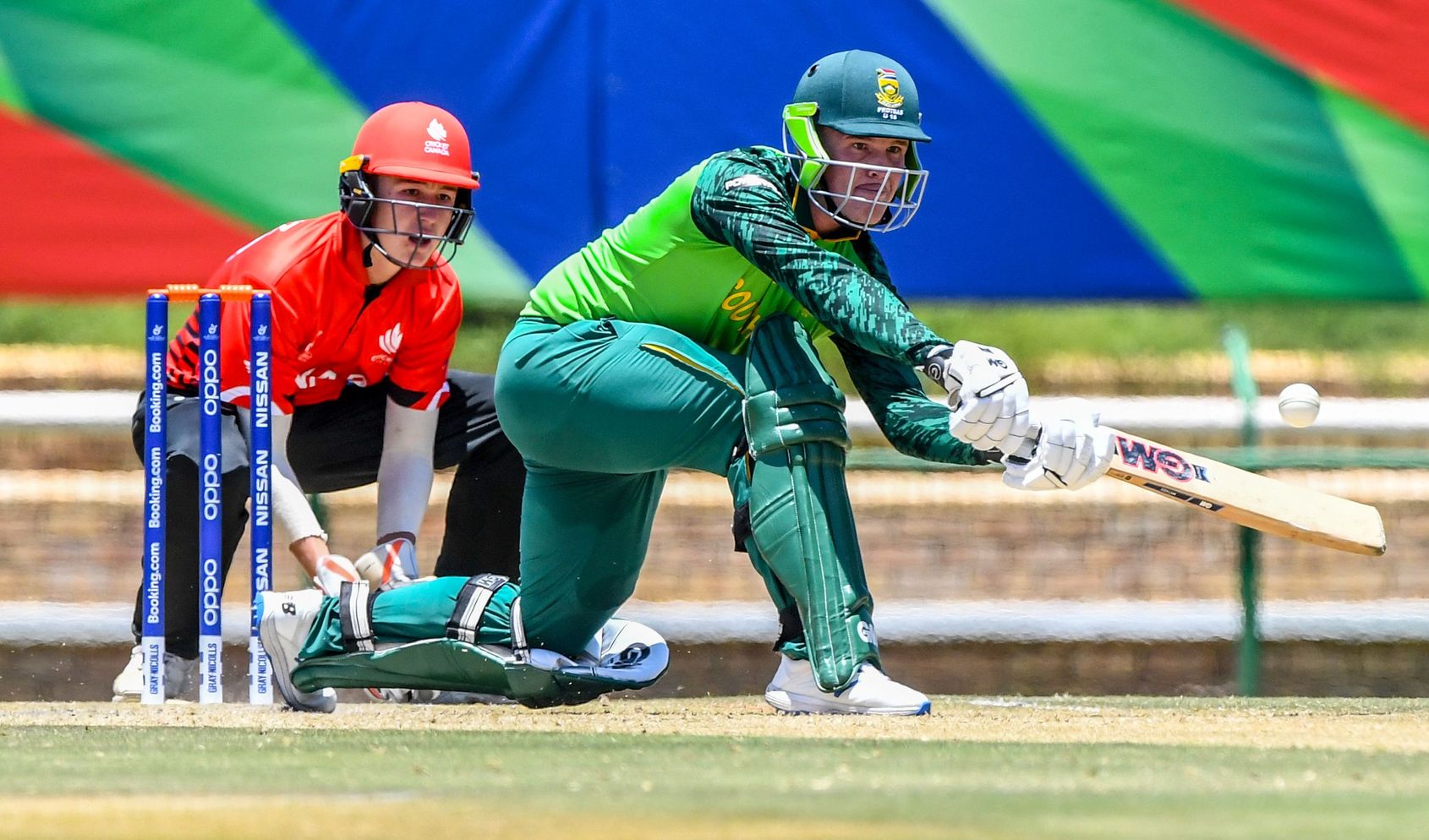 Afghanistan and Pakistan will both compete in the ICC U19 Cricket World Cup Super League after maintaining their perfect group-stage records in South Africa.

Pakistan’s victory over Zimbabwe means both they and Bangladesh will progress from Group C with a game to spare, while Afghanistan lead the way in Group D after their win over the United Arab Emirates.

South Africa’s victory over Canada means the final group game between the host nation and UAE will see the winner join Afghanistan in the Super League.

The most dramatic game of the day came in Group A however, with New Zealand putting themselves on the cusp of qualification after a six from the penultimate ball helped them defeat the now-eliminated Sri Lanka.

Shafiqullah Ghafari spun Afghanistan to the next stages of the ICC U19 Cricket World Cup after their 160-run victory over the United Arab Emirates at the North West University Oval, Potchefstroom.

The leg-spinner, the tournament find who has now picked up 11 wickets from two matches, took a five-wicket haul as UAE were bowled out for 105 chasing Afghanistan’s total of 265 for six.

The result means that the winner of South Africa’s match with UAE – who both sit on two points – on Saturday will progress through from Group D to the Super League stages alongside Afghanistan.

Aryan Lakra of the United Arab Emirates during the ICC U19 Cricket World Cup Group D match between Afghanistan and UAE at Absa Puk Oval on January 22, 2020 in Potchefstroom, South Africa.

Batting first, Ibrahim Zadran (87), Rahmanullah (81) and Ishaq Shirzad (35 not out) anchored the innings for the Afghans as they scrapped their way to a competitive target.

For the UAE, only captain Aryan Lakra (28) and fellow opener Vriitya Aravind (19) were able to show any resistance at the top of the innings before the collapse after they were dismissed.

“The wicket was good for spin bowling, there was a bit of turn. I just kept at it and eventually, I got the rewards,” said Ghafari.

Afghanistan captain Farhan Zakhil concluded, saying: “I would like to thank all the players and staff for ensuring that we manage to qualify through to the next round.”

Captain Bryce Parsons led from the front as his superb century proved the catalyst for South Africa’s convincing 150-run victory over Canada in Potchefstroom.

The talented all-rounder dispatched 15 fours and three sixes on his way to a Youth One-Day International (ODI) career-best score of 121 off 91 balls as the Junior Proteas posted 349 for eight.

Bryce Parsons of South Africa during the ICC U19 Cricket World Cup Group D match between South Africa and Canada at JB Marks Oval on January 21, 2020 in Potchefstroom, South Africa.

This was before Merrick Brett (two for 32), Jack Lees (two for 39) and Tiaan van Vuuren (two for 24) shared the wickets to help dismiss the North Americans for 199 all out with 8.5 overs remaining.

After losing the toss and being asked to bat, the hosts got off to a positive start with opener Jonathan Bird teaming up with Parsons for a 64-run partnership for the second wicket.

Bird kicked on to bring up his half-century, hitting 54 off 49 balls (seven fours and two sixes) before being dismissed, while Parsons went one better and, to the elation of the crowd gathered at the JB Marks Oval, raised his bat for the biggest score of South Africa 2020 so far.

Opening bowler Akhil Kumar took leading figures of four for 56 with the ball.

In their chase, Canada took the expansive approach in their innings to score at more than five runs per over as they were aided by loose deliveries from the South Africans, before crucial inroads from Brett and Lees during the middle period.

Despite losing wickets at regular intervals, the Canadians were anchored by Ben Calitz, before his undefeated 62 off 77 balls (6 fours) ended in vain as his side were eventually dismissed just shy of 200.

“We feel really good, it’s nice to get on the board in the tournament. We had a hard week of preparation and its good to see the results starting to show,” said Man of the Match Parsons.

“I am just excited that the batting unit has started click.”

Kiwis leave it very late but prevail over Sri Lanka

New Zealand’s Kristian Clarke struck a six off the penultimate ball of the match to help his country to a dramatic three-wicket win over Sri Lanka in Group A.

Clarke arrived at the crease with his side seven down, and after Sri Lanka had taken two wickets in the 49th over, including that of Beckham Wheeler-Greenall, run out for a crucial 80 off 111 balls.

He was followed a ball later by Quinn Sunde, as New Zealand suddenly looked like falling short of their testing 243-run target with 12 needed from the last over, bowled by Dilshan Madushanka.

Kristian Clarke of New Zealand hits the winning runs during the ICC U19 Cricket World Cup Group A match between New Zealand and Sri Lanka at Mangaung Oval on January 22, 2020 in Bloemfontein, South Africa.

That equation became from six from two balls when Clarke cleared his head and the ropes to spark huge celebrations from the side in black.

“Being able to take the match into the last over is something we don’t really see usually,” said New Zealand captain Jesse Tashkoff. “It was a great game of cricket, and credit to the Sri Lanka boys who really put up a good fight.”

Sri Lanka had earlier posted 242 for nine, after being sent in to bat by New Zealand. Several batsmen got starts, but failed to kick on, and it was Sonal Dinusha’s 46 from 52 balls that gave the innings some structure.

That platform allowed Ahan Sanchitha (64 from 48 balls) the license to charge at the back end, which he did to great aplomb, striking nine boundaries in the process.

The leg-spin of 17-year-old Adithya Ashok was again key for the Kiwis, as he returned figures of three for 38.

The chase was set up for New Zealand by opener Rhys Mariu, who compiled a sensible 86 from 106 balls, and staying at the crease until the 38th over.

With him around, the Kiwis looked in control, but they needed to hold their nerve at the last to claim the win, one that takes them within touching distance of the Super League.

Victory over India in their final game would see them progress as winners of Group A, though a loss could see them eliminated should Japan inflict a heavy defeat on Sri Lanka.

Tashkoff added: “India is going to be a great challenge for us. We will enjoy our rest day, and then look through some of the processes that might not have gone right today, and need work ahead of the India game.”

Haris heroics take Pakistan to next round

Pakistan sealed their passage into the next phase of the U19 World Cup after defeating a plucky Zimbabwe side by 38 runs in Potchefstroom.

Man of the Match Mohammad Haris clattered 81 from just 48 balls, featuring four sixes and six boundaries, to help his side notch 294 for nine.

“It was a great game for me. The coach just told me to relax and play my natural game, and that is what I did,” Haris said after his swashbuckling knock.

“The coach told me that if I can bat to the end (of the overs), then we will get big runs. That is what I tried to do.”

Around Haris, there were good contributions from Fahad Munir (53) and Qasim Akram (54 from 50 balls), and that ensured that the runs kept flowing, despite regular strikes from the Southern Africans.

Dylan Grant returned figures of three for 46, while off-spinner Wesley Madhevere held his own against good players of slow bowling, with a tidy spell of ten overs for 42 runs.

Chasing 295 to stay in the competition, Zimbabwe certainly gave it a good go.

Madhevere, a product of St Charles College in South Africa, showed his prowess with the bat, too, starting the innings positively, with a 55-ball 53. He clubbed one six, and sprayed six other boundaries around the park, to give Zimbabwe hope.

Milton Shumba (58 from 82 balls) and skipper Dion Myers (39 from 50 balls) kept it going, but once they fell, the Zimbabwean spirit started to wilt.

Tahir Hussain finished the tail off with the ball, with figures of three for 42, while Abbas Afridi was more expensive (three for 55), but also helped himself to key wickets in the middle overs.

Give me a break – I’m not a cricket robot, says Kohli