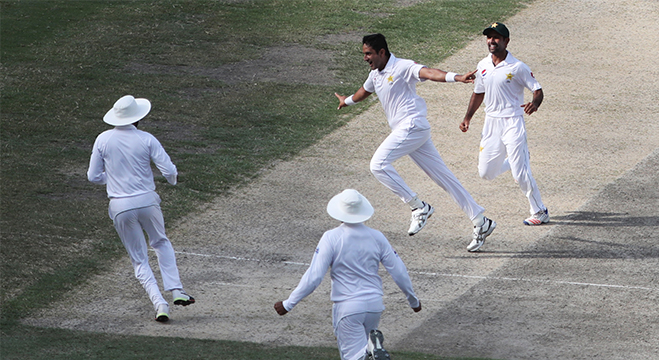 The right-arm medium pacer dismissed Aaron Finch (49) and the Marsh brothers — Shaun and Mitchell – for ducks as Australia slumped from 87 without loss to finish the fourth day at 136-3.

At stumps opener Usman Khawaja was batting on a fighting 50 and Travis Head on 34 as the pair had added an invaluable 49 for the unbroken fourth wicket stand to prolong Australia’s resistance on a weary and spinning Dubai stadium pitch.

Pakistan will need seven more wickets while Australia require another 326 runs for an improbable victory to take a 1-0 lead in the two-match series, with the second Test starting in Abu Dhabi from October 16.

Abbas said he was “happy to be among the wickets”.

“I used the crease to bring the ball in and got wickets from those deliveries,” he said.

“We need seven more wickets so, God willing, we will get them and get this win for which we have worked very hard and it will be good to take a lead in the series.”

It was an action replay of the first innings as Australian openers put on 87 — they made 142 in their total of 202 on Tuesday — as Finch was trapped leg-before soon after tea with a sharp incoming delivery from Abbas.

Finch, who took an unsuccessful review, hit five boundaries in his knock.

Two balls later Abbas had the elder Marsh caught behind and in his next over trapped Mitchell right in front of the stumps only to get the decision on review.

But it was Finch and Khawaja in the afternoon session who batted with resolve.

Pakistan-born Khawaja, who top scored for Australia with 85 in the first innings, held one end intact with resolute batting, having so far hit six boundaries.

Abbas has figures of 3-26 to add to his four wickets in the first innings, but leg-spinner Yasir Shah was still wicketless in the match.

If Australia still wish to win this match they will have to rewrite the history books as the highest chase in all Test cricket is West Indies’s 418-7, made against Australia at Antigua in 2003.

Pakistan made 482 in their first innings while in reply Australia were dismissed for 202.

Jon Holland, who took the key wicket of Azhar Ali for four on Tuesday, dismissed opener Imam-ul-Haq for 48, caught and bowled off a flighted delivery.

Debutant Marnus Labuschagne then had Haris Sohail caught close to the slips for 39, leaving Pakistan at 110-4. Sohail and Imam had added 65 runs for the fourth wicket.